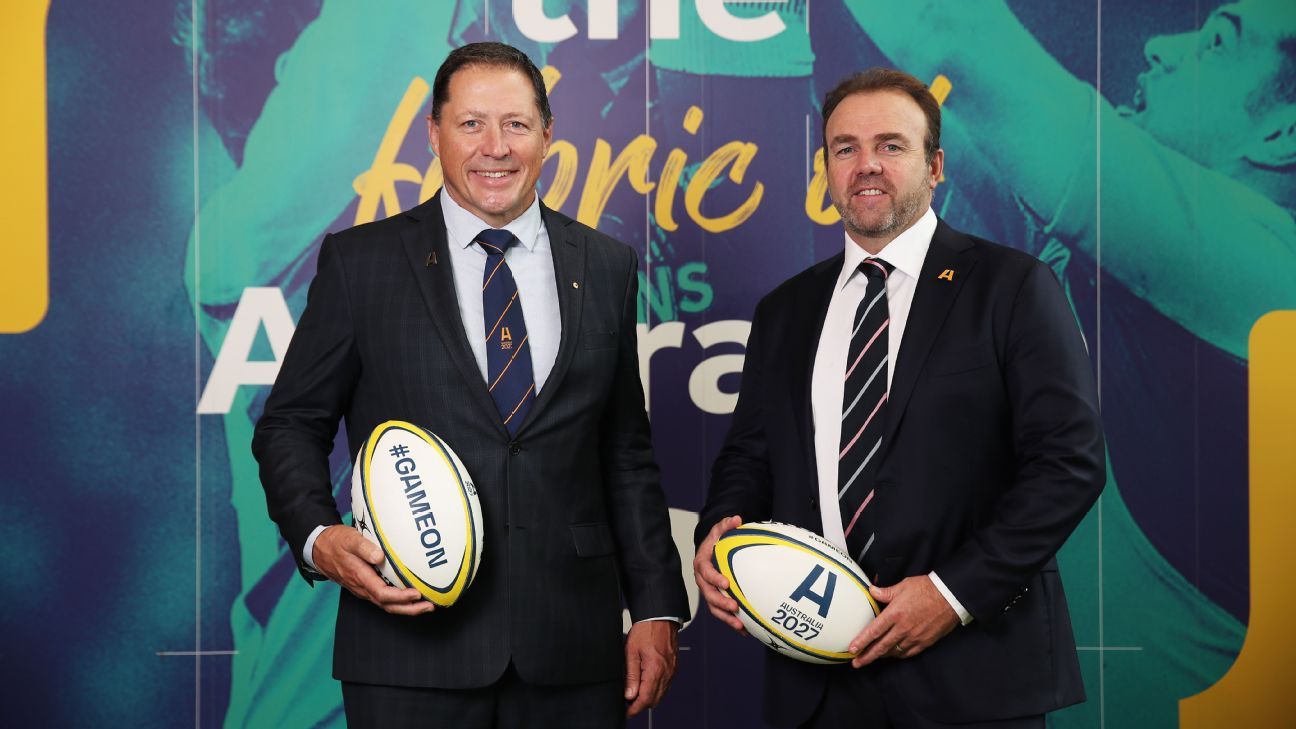 Rugby Australia [RA] boss Andy Marinos has pledged to not repeat the mistakes of the past, with the governing body already planning an endowment fund to manage the financial windfall that will be generated by hosting the 2027 Rugby World Cup.

RA learned early on Thursday morning [AEDT] that World Rugby had named Australia as the “preferred candidate” to host the tournament, which all but guarantees the event will return Down Under for the first time in 24 years.

It is a huge coup for the game in Australia, which only 15 months ago was running on the smell of an oily rag after the onset of the COVID-19 pandemic. After originally suggesting the game could be forced to “turn amateur“, chairman Hamish McLennan and then interim-chief executive Rob Clarke set about a brutal cost-cutting exercise that helped save the professional game from extinction.

While the pursuit of the tournament was only really formalized in mid-2020, ESPN understands the plan to bring the Rugby World Cup back to Australia was originally hatched in 2017, but at that stage the 2039 showpiece had been the goal.

But having steadied the financial ship last season and then consolidated that position with a new broadcast deal, helped along in 2021 by what appears to be an improving Wallabies team under Dave Rennie, Australian rugby can now look ahead to a dream run of events that includes England’s visit in 2022, the British & Irish Lions series three years later, and then the return of game’s flagship event in 2027.

“It certainly is a very exciting day for Rugby Australia,” Marinos said on Thursday morning. “Having received the news overnight that we are the preferred bidder or preferred candidate status, I think that just puts us in a very very good position, as we’re going to work hand-in-glove with World Rugby over the next four to five months to deliver the optimum model for them and for us.

“But I just think for the game in this country, and the country [as a whole], it’s a really significant milestone and one that’s to be celebrated by everybody.”

Executive director of RA’s World Cup bid advisory committee and former Wallabies captain Phil Kearns lauded the work of his team and various stakeholders, including the state and federal governments, to get to this point, while stressing that there was still more to be done for Australia to be completely signed off as the host – a decision that will be handed down in May.

“And the pathway that we’ve got with the British Lions, the World Cup in 2023 [France], England next year and then to the Rugby World Cup in 2027, this is a great growth opportunity for rugby in Australia.”

As was the case in the early part of this century, RA has the opportunity to set itself up financially with the double-whammy of the game’s two biggest events set to inject tens of millions of dollars into Australian rugby.

But Australian supporters will be wary of the blunders that followed the 2001 Lions series and 2003 World Cup, when a reported windfall of $40 million was squandered on executive salaries, inflated player contracts and other unnecessary expenditure instead of being pumped squarely into grassroots.

This time around, plans are already afoot for any financial windfall to be locked away into a fund that will not only sustain the game but hopefully also allow it to thrive post 2027.

“That’s been at the forefront of the board’s mind from the inception,” Marinos said. “This is not about getting a windfall and propping up, artificially, certain areas of the game for a short term return. This is about putting it into an investment vehicle that is going to drive long-term sustainability.

“I think we’ve got an obligation [to manage it], and there has been enough examples in sport that demonstrate, the ones when you do do that, how you can set yourself up for success, and [those] when you don’t. So we’ve got a plan in place and once we’ve finalised the deal, we’ll certainly be implementing against that.”

RA has already identified 16 potential venues that could host World Cup matches, but World Rugby allows only for 8-10 official stadiums to be used during the tournament. It is hoped that those who miss out could still be used as training venues for the 20 participating teams, which would mean the tournament engages with as many people as possible across the country.

But it appears only two venues are in line to host the final, largely due to World Rugby rules around capacity. “No it will ultimately be World Rugby’s call,” Marinos said of the final. “I would probably say there’s two venues, being Stadium Australia and the MCG, in terms of their capacities. Possibly Perth, but you would think for a World Cup final…I don’t know, that’s World Rugby’s decision.

“We [RA] would certainly be a voice and an ear, and [offer] an understanding where we’re going to get the best yield and result.”

In the lead-up to the 2003 Rugby World Cup, rugby league players Wendell Sailor, Lote Tuqiri and Mat Rogers all switched codes and went on to play in the final against England.

While all three men eventually returned to rugby league, and the decision to originally sign the trio on huge contracts largely divided the Australian rugby community at the time, Marinos indicated he thought the lure of tournament would again have NRL players considering a switch of codes.

“I think a lot of those league players might look at what the opportunity is and start to make some decisions for themselves, and for us we’re always looking at the union guys who have gone to league and seeing how they’ve performed,” he said.

“And we’ve seen in the past with the guys coming back from league into union, some of them have made a great impact. I think for us hosting the home World Cup, we just want to put the very best 23 players out on the field and make sure we turn that picture around from what we saw in 2003.”

Why losing in Australia might help the USWNT
Panthers bench Cam in blowout loss to Dolphins
Millions lost, lawsuits everywhere and eight date changes: How a typical title defense for Teofimo Lopez went sideways
Kaymer to take 3 months off for birth of child
Cowboys’ Hill suspended two games for punch