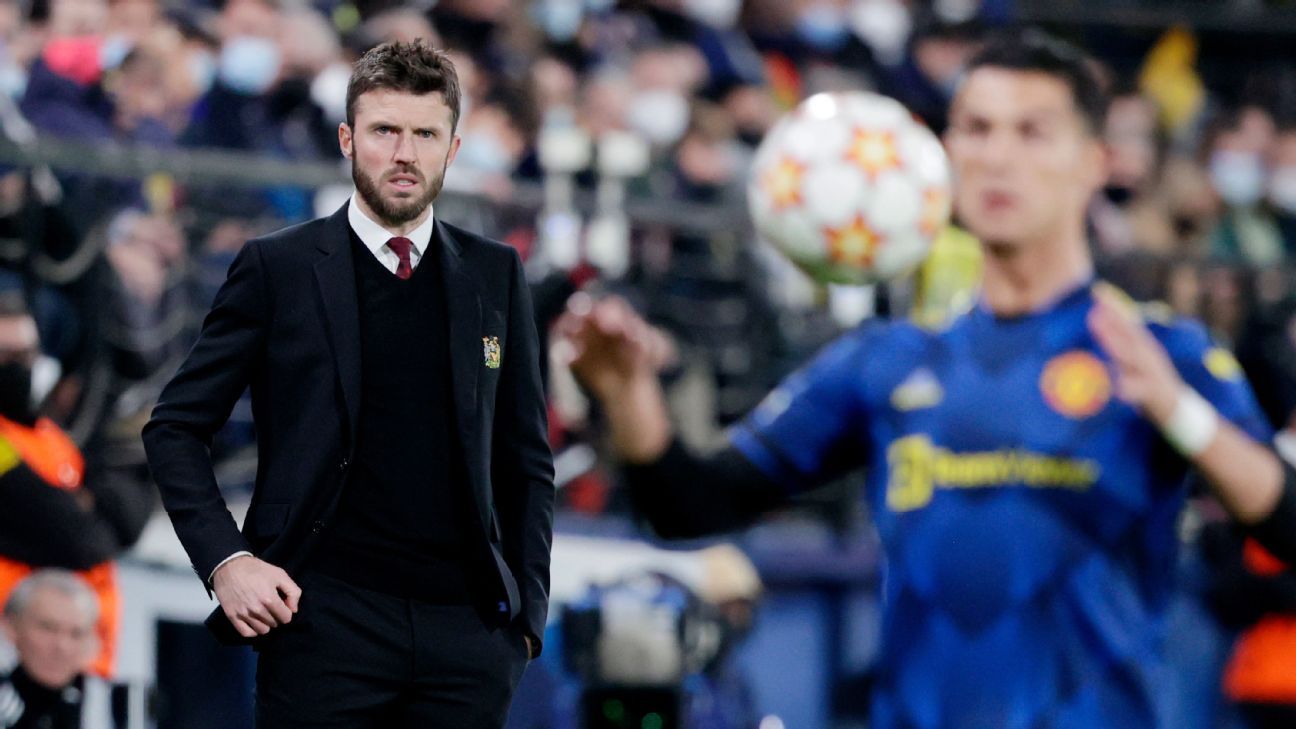 VILLARREAL, Spain — The Manchester United-owning Glazer family, as well as executive vice-president Ed Woodward and director Richard Arnold, will no doubt celebrate the team’s 2-0 win over Villarreal to reach the knockout rounds of the Champions League as Group F winners, but they don’t deserve to.

By botching the sacking of Ole Gunnar Solskjaer and giving rookie manager Michael Carrick a little over 48 hours and two training sessions to prepare for a tough trip to Spain, they set him up to fail.

But as they have often done in Europe this season, United found a way.

Well, Cristiano Ronaldo did. His fifth goal in five Champions League games, followed by Jadon Sancho‘s first goal since joining from Borussia Dortmund, means United will be in the hat for the last 16 in the new year.

The club will enjoy the financial windfall that comes with it, but this progress was secured despite a two-week international break in which Solskjaer remained in his job, only to be let go — and an untried coach installed — on the eve of one of United’s biggest games of the season.

Carrick, along with fellow coaches Mike Phelan and Kieran McKenna, kept his job when Solskjaer left, but this was a baptism of fire for someone with zero previous experience as a manager. It wasn’t pretty — particularly in the first half — but that was to be expected after a tumultuous couple of days.

Carrick needed David De Gea to be at his best to claim a welcome clean sheet after shipping 19 goals in Solskjaer’s last seven games, while at the other end Ronaldo and Sancho took advantage of two rare chances.

At the final whistle, Carrick went over to the away fans high above the goal and was serenaded by a chant of “Carrick, you know, it’s hard to believe it’s not Scholes” — the song from his playing days.

It was well-deserved, and if the former England midfielder goes on to have a career in management, he won’t face any tougher challenges than these two days. He can thank his bosses for that.

“When you’ve had results we’ve had and gone through what we have in the last few days, it would be very foolish to think it would be free-flowing football and everything would be wonderful,” said Carrick afterwards.

“The result is a major plus; from the run we’ve gone on, you can’t hide from that. To get that feeling of winning a football match for the players is huge.

“It’s not an important result for me. It’s for the club and the players. Tonight isn’t about me by any stretch, it’s been an emotional few days.”

Carrick, suited and on the touchline for the entire 90 minutes, suggested at his first news conference on Monday that because he had worked so closely with Solskjaer and had so little time to prepare after the disaster at Watford, not much would, or could, change.

He did, though, try to put his stamp on the team, bringing in Anthony Martial and Donny van de Beek and dropping Marcus Rashford and Bruno Fernandes.

Fernandes seemed untouchable under Solskjaer, and even after a miserable display at Vicarage Road, it was a brave call for Carrick to immediately drop the Portugal midfielder.

Fred and Alex Telles were also recalled into a system that looked like a shift away from Solskjaer’s usual 4-2-3-1, with Martial and Ronaldo paired up front.

Some things, however, are harder to change, and for 45 minutes there was a familiar pattern. Aaron Wan-Bissaka gave the ball away, Ronaldo threw his hands up in frustration, De Gea made two good saves and Villarreal were the better team.

The first half, which began with the travelling United fans singing in support of Solskjaer, ended with the Spanish side having had more possession and nine shots to United’s three.

A reminder that Villarreal are currently 12th in La Liga and have won three of their 13 games this season, although Watford started on Saturday 17th in the Premier League table and United made them look like a mix between Brazil‘s 1970 World Cup team and the Harlem Globetrotters.

De Gea was needed again after half-time, making his best save of the lot from Manu Trigueros, and Arnaut Danjuma blazed a good chance over the bar. But when Carrick brought on Fernandes and Rashford midway through the second half, the game changed.

Fernandes began to create and Sancho looked more lively, forcing Geronimo Rulli into a good save.

“The first half was tight, we grew into the game as we went on and you could see we were taking more of the ball and that belief was growing,” said Carrick.

“I thought we’d be better after half-time, but it proved to be a little bit tougher at the start of the second half. We had the players to change it and in the end it worked out. Everyone played their part. There was a real drive and togetherness and support for each other.”

United still needed Villarreal to gift them a goal after 78 minutes, Rulli playing Etienne Capoue into trouble and Fred’s pressure in midfield giving Ronaldo the chance to lift the ball into the net.

Sancho’s late second — a thumping finish off the crossbar that didn’t suggest he’s a player lacking confidence — maybe flattered Carrick’s team, but he won’t care. With the odds stacked against them, Ronaldo, United and their new interim manager delivered.