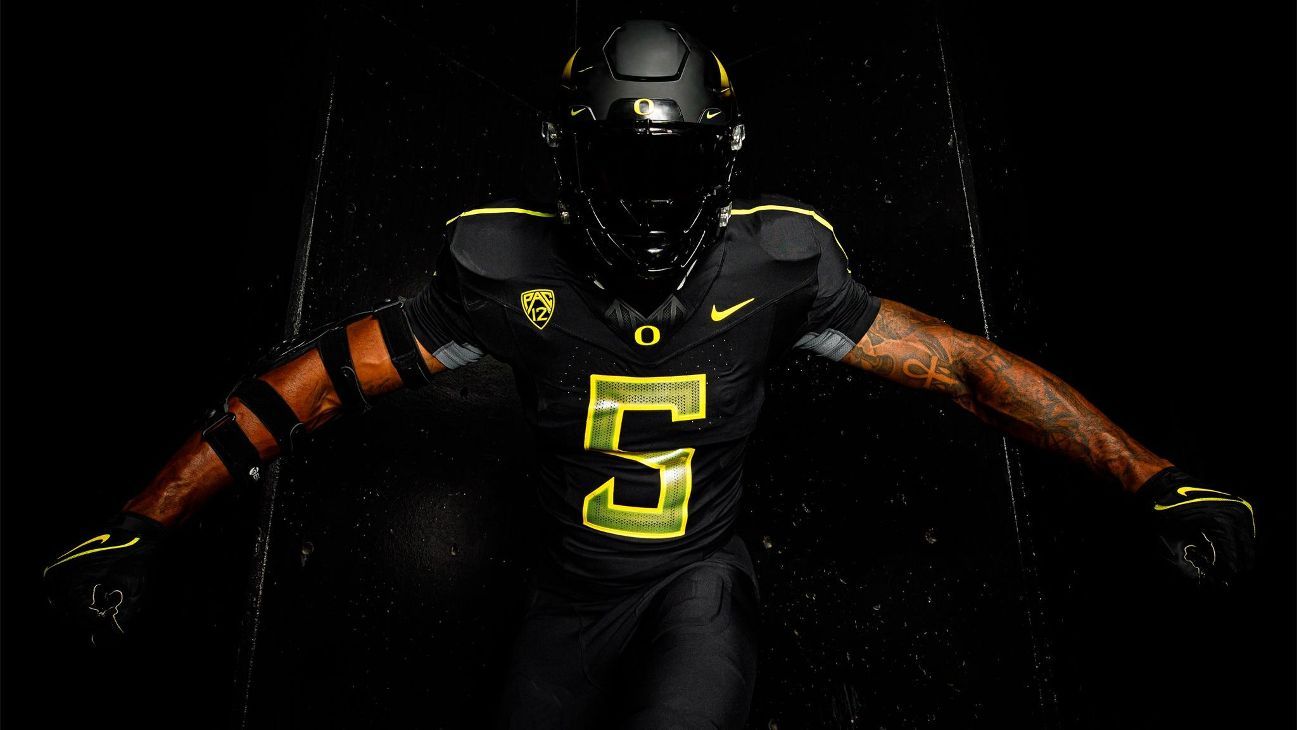 College football enters its seventh week, and last weekend’s games treated us to some spectacular action.

Alabama finally tasted defeat for the first time in nearly two years, Texas vs. Oklahoma gave us an instant classic in another Red River Showdown, and many more games kept fans at the edge of their seats. After a chaotic Week 6, one can only hope the action will be just as entertaining this weekend with some exciting matchups on tap.

The uniform selections have been on point all season, and Week 7 doesn’t disappoint in the slightest. Before these teams get their fits dirty on the gridiron, let’s appreciate some of the best threads across the college football landscape this coming weekend. Some schools honor their past, while others show off their exceptional color coordination.

But we begin with a fit that turns the lights out on the competition.

The No. 9 Oregon Ducks have done it again — this time going dark for their uniforms this week against the California Golden Bears. The black gives off a matte-like finish, accentuated by hints of bright yellow. Moreover, the wings on the helmet are shiny, then fade into deep black as they transition toward the face mask. Blackout might be a simple concept, but Oregon pulled it off in a stylish way.

The Kansas Jayhawks are taking us back to the Kansas Comet era with their “Hail to the Old KU” uniforms for homecoming week this year.

In collaboration with Adidas, the Jayhawks will wear light blue jerseys paired with dark blue pants. The jersey features the word “Kansas” in white block lettering and has the traditional Jayhawk head on the shoulder caps. In addition, the helmet and pants feature the “Bowtie K” logo from 1929, according to the school’s website.

Proud, classic and bold are words the university used to describe these throwback threads — and they hit the mark for each one.

New threads for Saturday in honor of Homecoming 📸#KUfball pic.twitter.com/ZoUM5oadMX

The Montana Grizzlies are breaking out a vintage uniform set that honors their 2001 national championship team. The maroon jerseys are clean with the gray lettering and “Montana” across the chest — reminiscent of their wardrobe from 2001. But there’s more to the Grizzlies’ exceptional ensemble.

The jersey is made of the same mesh material as their threads during the 2001 season, an added touch to these vintage uppers. The classic bear paw symbol is present on the shoulders, a staple for the championship team. The maroon jersey is sandwiched between gray pants and a helmet with a cursive “Grizz” decal on each side. Montana makes gray and maroon work while honoring the school’s championship history.

Washington is throwing it back to 1991 — the last time the school won a national championship. The Huskies’ uniforms pay tribute to that team with a few modern twists. The royal purple jersey and white block letters are a classic yet stylish look for Washington, and the pants are in a brighter gold hue to resemble the garments worn by the ’91 squad.

But that might not even be the best part of this outfit, however.

The Huskies’ “Panting Dawg” logo returns, featured on the pant leg and on the helmet as the logo. Purple and gold accessories round out Washington’s wardrobe, with the team looking fresh as it honors the 30th anniversary of that championship squad from 1991.

Columbia is going even further back in time for its threads this weekend. The team is paying homage to the school’s 1961 Ivy League championship team with this outfit combination. The Lions decided on powder blue jerseys with the numbers in the same font as their 1961 kit, which had to be re-created from scratch with the help of Nike, according to the team’s website.

Furthermore, the helmets have the jersey number the player is wearing on the right side — a calling card for the fits of Columbia football past. The modern logo is still present on the opposite side, giving the uniform a modern touch while still keeping things vintage for the school’s homecoming game.

The Illinois State Redbirds join in on the homecoming fun with a uniform honoring their school’s history. They will wear red jerseys highlighted with white numerals and decals.

The numbers are shown on the shoulder caps, and the power of the red hue makes this jersey jump off the screen. The helmets are also white, but the modern Redbird logo that’s usually on there is gone. Instead, the school brought back its anthropomorphic bird design, with the fowl carrying a football in its hand. This symbol hasn’t been used since the 1960s, according to the school’s website.

Even though the pants have not been revealed yet, the retro logo and vibrant red jerseys make this combination a top-tier ensemble for game day.

The Washington State football team’s wardrobe combination shows off an eye for color this week. The uniforms showcase black jerseys with crisp anthracite helmets, giving the squad a clean look for Family Day. The maroon logo is the tried-and-true decal on the helmet, with pants in the same shade as the helmets. The uniforms are fire, but having the family members debut the Cougars’ fit makes this reveal even more adorable.

Utah continues to impress with the threads this year, this time going with a white/black/white combo for its matchup against No. 18 Arizona State. The details — from the stripes on the shoulder caps to the geometric designs on the helmets — give this combo spunk and creativity. In addition, a decal honoring Aaron Lowe and Ty Jordan, two former Utes football players who died less than a year apart in separate shooting incidents, sits on the back of each helmet.

This design rounds out a fire fit enhanced by keen details.

It looks as if TCU is channeling the Black Panther this weekend — at least that’s what its uniforms allude to. The Horned Frogs will debut a new uniform combination, going with a black/white/white look for their game against No. 4 Oklahoma. Their black helmets are sleek, and the stenciled purple Horned Frog logo on the side makes them even more fierce.

Moving to the jersey, it’s a crisp white with a purple and black diamond design surrounding the collar. Gray is used as the trim for the numbers, filled in with a deep purple. White pants complete this outfit, and TCU looks like a formidable foe for OU — with some style, of course.

The Bearcats of Cincinnati have made a few appearances on this list, and their wardrobe for Saturday’s matchup with UCF earns them another spot. They have decided to rock black helmets with a red jersey and black pants.

Some might call this uniform basic, but the use of color makes this ensemble exceptional. The white and red stripes along the shoulder add some uniformity and pop to the jersey while still coordinating with the rest of the fit. Red and black always look fantastic together, and Cincinnati just taught everyone how to use those colors for a quality outfit.

Which school wore it better?

It’s not often we have universities wearing strikingly similar fits in the same week, but the Syracuse Orange and Florida Gators look like long-lost twins, given their weekend apparel.

Syracuse is rocking an all-orange fit for its Orange Out game against Clemson. Navy is the secondary color, being used for the pant stripe, jersey decals and logo on the helmet. “Orange” is spelled across the chest in white, and white also serves as the number color. Syracuse’s use of orange is impressive, but is it better than that of another team that went a similar route this weekend?

🍊 ORANGE OUT 🍊 @CuseFootball vs. Clemson: Friday, 7 PM@CintasCorp is the official uniform supplier of the Carrier Dome. pic.twitter.com/NzGHCx5Cel

The No. 20 Gators will do something for the first time since 2016 — wear an all-orange uniform on game day. The helmet features the word “Gators” in blue, written in a bubbly cursive font. Blue and white are the stripe colors down the helmet’s center and also are used on the shoulder caps and pant legs. Florida will sport these unis against LSU, which is — coincidentally? — the last team it defeated wearing this set, according to Gators Uniform Tracker.

All orange in Baton Rouge. 🐊 pic.twitter.com/hbKNO8zBXn

The Gators or the Orange — which school has the better orange ensemble this week?

Putting together different colors is a challenge in fashion, but using one color to make an entire fit work could be even more difficult. However, it didn’t seem like an issue for Boise State, as the Broncos unveiled some icy-blue threads for their upcoming game against Air Force on Saturday night.

The cool shade of blue is used throughout the outfit — complemented with silver and orange. The latter two colors are used sparingly, only as the trim and accent hues for the jersey number and again on the shoulder stripes.

The helmet features a giant bronco logo that takes up almost the entire side of the helmet. The chrome face mask adds some flair to this combination, as the Broncos match their turf field perfectly with this uniform.

For the Baylor Bears, they decided to go green with their game-day ensembles. They will put on green pants, jerseys and helmets with yellow acting as the fill color. The school completes the monochromatic look with helmets featuring a very special logo.

The “Sailor Bear” makes its return to Baylor’s headgear, being featured on both sides. This rendition of the school’s emblem is loved by many in the Baylor community — even the school’s athletic department couldn’t contain its excitement when it learned this decal would be making a return.