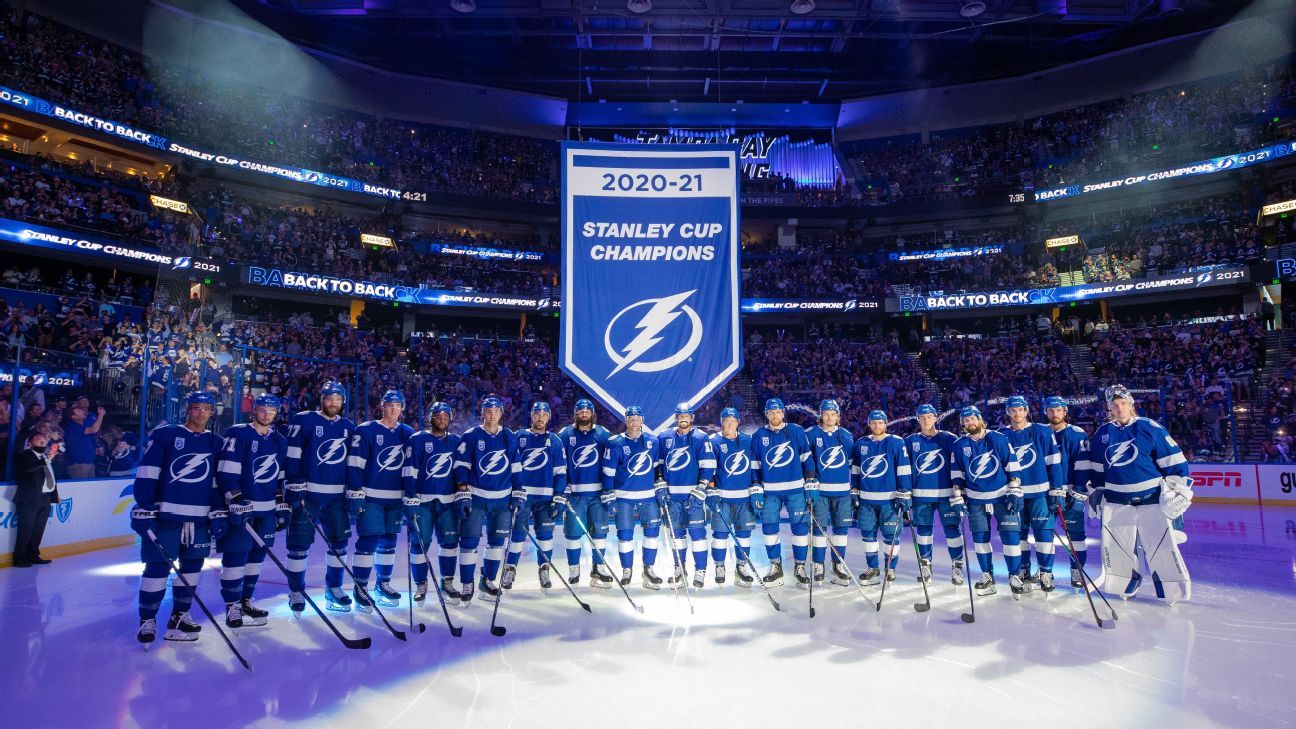 After a long offseason, hockey is back!

The NHL regular season kicked off Tuesday night with some exciting games from some of the the league’s best — and newest — franchises. The Tampa Bay Lightning raised their second banner in as many years, but the Pittsburgh Penguins spoiled their special night. Later on, two of the league’s newest teams — the Vegas Golden Knights and the Seattle Kraken — took the ice and started their respective seasons.

Both games were featured on ESPN, bringing hockey back to the network after quite some time — 2003 to be exact. Some NHL teams had some fun with this, remembering where their franchises were the last time hockey was last broadcasted on ESPN.

The @Buccaneers had just won their first Super Bowl, and then we went on to win our first Cup 🙂

• Goalie coach Andy Chiodo appeared in 8 games for the Penguins.

we reeeeeally wanted to be part of this but when we looked back in our 2003 folder there was nothing there :/

we weren’t even born yet 😳 pic.twitter.com/akYx4oB6Z2

The return of the puck to the ice was a celebration for many fans and enthusiasts. Social media also reacted the beginning of the 2021 NHL regular season. Grammy award-winning artist Justin Bieber helped set the stage for what was a huge night on the ice for the NHL.

Tune in for more from @justinbieber before the games begin tonight! #NHLFaceOff pic.twitter.com/zODKFABwe4

The regular season of the NHL kicked off with the Pittsburgh Penguins traveling to Florida to take on the defending champions in the Tampa Bay Lightning. The Penguins were without star Sidney Crosby who is still rehabbing from wrist surgery. Nevertheless, Pittsburgh saw Tuesday as a great day for hockey and hoped to start their 2021 campaign with a win. Despite them being without their impact player in Crosby, the Penguins received a shout-out from their fellow Pittsburgh team — the Steelers.

The Lightning are coming into 2021 looking for a three-peat, which would cement this team’s status as a hockey dynasty. The team knew that their journey started Tuesday, and this video narrated by Steven Stamkos from the squad’s Twitter account set the tone for their 2021 campaign. They also had a little fun courtesy of Pierre-Edouard Bellemare during their morning skate.

A revitalized hunger for more.

Hey Belly, what day is it? pic.twitter.com/dp5uwpLsaf

Tampa Bay also brought the tunes to begin their season with a performance by multi-platinum recording band All Time Low. The concert was held on a stage above the waters where the Hillsborough River meets the Garrison Channel, where fans watched from land at the Tampa Convention Center’s Sail Plaza or by boat in Garrison Channel before Tuesday’s contest. They had the Lightning’s Stanely Cup nearby during their performance, as they got the 2021 NHL season off to a rocking start.

Starting the 2021-22 season with a bang!@AllTimeLow kicked things off with their song Monsters. #NHLFaceOff pic.twitter.com/PB5BWaHes1

Before the new season of hockey began, the Lightning relived last season’s championship year one more time with their banner raising ceremony. The moment was in front of a packed Amalie Arena — a much different atmosphere compared to last year when the arena wasn’t as full due to COVID-19 protocols. The fans showered their team with praise for a great 2020 season and cheered them on in what hopes to be a successful 2021-2022 campaign.

The first goal of the 2021 NHL season came from Danton Heinen. After a scoreless first period, a deflected shot came Heinen’s way in the second, and he put the puck in the net to give the Penguins a 1-0 lead. This was Heinen’s first game as a Penguin, signing with the team this offseason. He wasn’t the only one to score in the second period as Brian Boyle, who was just signed on Monday by the Penguins, also scored to raise Pittsburgh’s lead to two.

What a way to make your team debuts, huh?

Both offenses got things going in the third period, with a combined five goals being scored in that frame. The Penguins took advantage of an empty net by the Lightning and ran away in the contest late. They pulled off the upset, and ruined Tampa Bay’s banner night with a 6-2 win. It’s only one game, but it was an impressive outing by a Crosby-less Penguins and an underwhelming one by the defending champion Lightning.

NOW THAT IS HOW YOU START HOCKEY SEASON! pic.twitter.com/CPZb29lFm6

Pittsburgh takes this one. #PITvsTBL

The second game of ESPN’s doubleheader of opening night NHL action featured the league’s two newest franchises. The Seattle Kraken began its inaugural season against the Vegas Golden Knights, who are in their fifth season of existence. Both teams are expected to make some noise during the 2021 season despite being two of the NHL’s youngest franchises. Prior to the game, other Seattle professional sports teams reached out to the Kraken via social media and wished them luck on their first season on the ice.

Whole city behind you 💙

Our new roommates are making their regular season debut tonight!

Best of luck tonight to our friends at the @SeattleKraken! 💙 pic.twitter.com/6fml3O1LJp

The Kraken players had some fun before things got serious Tuesday night, kicking the soccer ball around amongst themselves pregame. If Brandon Tanev plays this season as hard as he was going after the soccer ball, the Kraken could have an impressive opening year.

The Golden Knights need to make their mark on this season early, as they have championship or bust aspirations. Maybe they took the term “leave their mark” in a literal sense, as their logo was seen all around Vegas before the game.

The Knights brought out fire footwear to begin their 2021 season. Before putting on skates, Vegas players William Karlsson and Jonathan Marchessault donned some exceptional shoes pregame. Karlsson wore spiked shoes that were as shiny as they were dangerous, and Marchessault sported black shoes with a red geometric design. Both men got an A+ for their ensembles with some of the best fits from opening night.

Even though they are foes on the ice tonight, the Golden Knights made sure they welcomed the Kraken to the NHL brotherhood. Even though it looked like a half-baked welcome, Seattle still appreciated Vegas’ kind pregame gesture.

It’s an exciting time for hockey fans in Washington — and a full-circle experience for two people. John Barr and Paul Buxton had a sign four years ago at a hockey game that read “We [Seattle] want the NHL next,” inferring that their city wanted be next to receive an expansion team. Four years later, the statement came to fruition, and Barr and Buxton were in attendance for the Kraken’s first franchise game on Tuesday night — with an important change to their sign.

Unlike last season, arenas will be packed, and fans in Vegas were pretty pumped to see their team take the ice in person. The atmosphere in the T-Mobile Arena was electric as the Golden Knights took the ice for warmups.

Right before the puck dropped, Vegas showed an incredible clip on its ice. The video showed a Kraken (Seattle’s mascot) wreaking havoc in the sea before the Golden Knight vanquishes the beast. Maybe Vegas was doing a little foreshadowing, but it was an impressive video nonetheless.

Well, this is incredible pic.twitter.com/sB6y5IqAwr

During the first intermission, the Golden Knights Twitter account started a new game to pass the time. It has a food tournament, pitting two cuisine items head-to-head — with the winner moving on to the next bracket during the team’s next contest. What was the first matchup of the year? Mozzarella sticks vs. jalapeno poppers.

All season long, we will be putting two foods up against each other head-to-head. Winning food moves on to the next game.

Vegas also had a special guest at their first game of the season. UFC flyweight champion Brandon Moreno stopped by for the festivities, even getting the crowd hyped during the first intermission. It’s safe to say he succeeded in getting the audience pumped up for the remainder of the game after he cranked the manual siren machine.

In the second frame, Vegas extended their lead thanks to a goal by Nicolas Hague. His goal gave the Golden Knights a 3-0 lead over the Kraken. The T-Mobile Arena was loving what they were seeing from their squad in the first game of the 2021-22 season.

IT’S 3-0 AND THE FORTRESS IS ROCKING

Ryan Donato was the one who scored the first-ever goal in Seattle Kraken franchise history. He scored just as the power play ended in the second period, cutting the Golden Knights lead to two. Seattle was excited about their first goal — and they weren’t done. Shortly after, Jaden Schwartz added another score to bring the Kraken within one.

omg are you the fun police now

The Kraken didn’t go away quietly, as they tied the game in the middle of the third period. Morgan Geekie scored for Seattle with an accurate wrist shot from a good distance — but it didn’t give the Kraken the lead for long. Nearly a minute after Geekie’s score, the Knights scored a goal of their own by Chandler Stephenson off of his skate. After another look by the referees, the goal was confirmed, but the Knights’ social media team had their own reasons for why the play needed an extra review.

take em how you can get em 🙃 pic.twitter.com/8MbGTKBuTw

we hope that’s why anyway

The Knights’ defense came up big late, getting numerous saves against a furious comeback effort from the Kraken. Vegas was able to hold on at home and get the victory 4-3. The final minutes of this game gave fans high-quality hockey and was a great end to a phenomenal opening night of the 2021 NHL season.

We made history tonight and that’s what matters the most. 💙#SeaKraken pic.twitter.com/K9gbERqddQ

The Golden Knights’ social team had one more trolling tweet to cap off the evening.