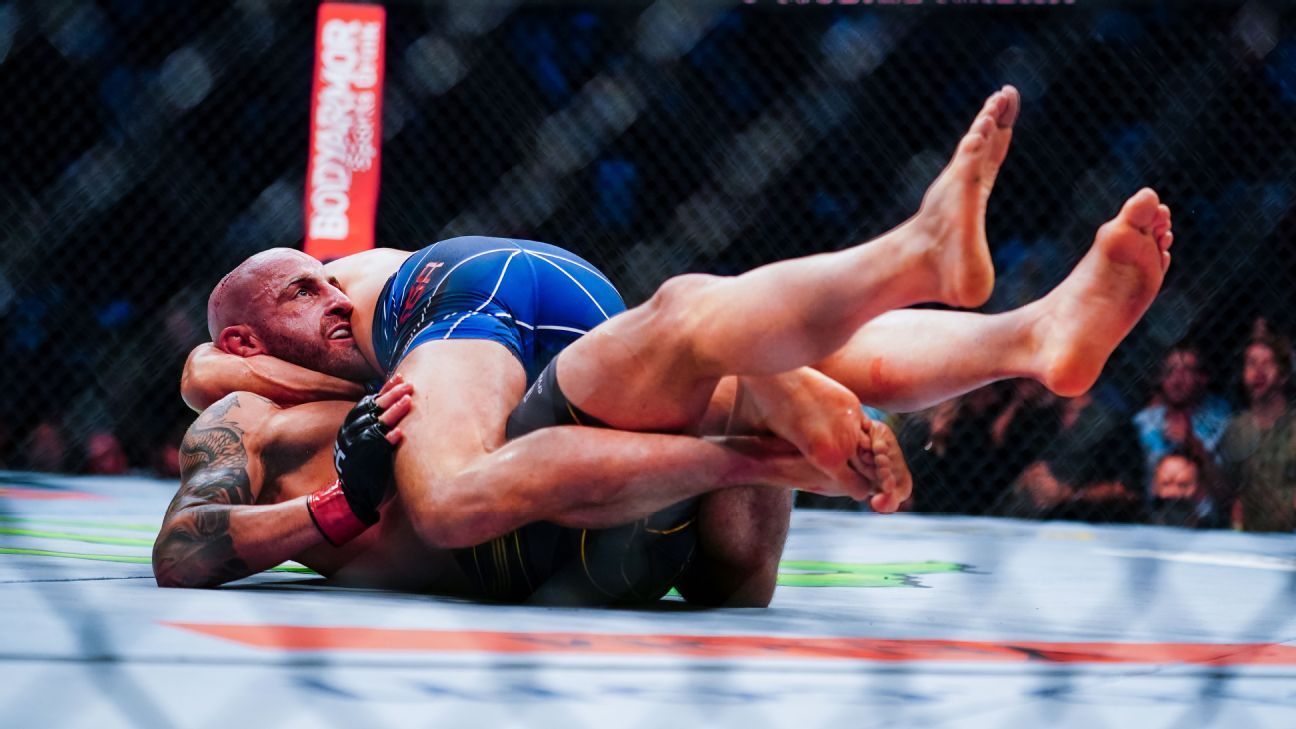 “One of the best title rounds you’ll see.”

That was how UFC commentator Jon Anik described the incredible third round between Alexander Volkanovski and Brian Ortega during their featherweight showdown at UFC 266.

The MMA world remains a buzz nearly three weeks on from Volkanovski’s unanimous decision win, while those who doubted the Australian’s championship mettle have quietly retreated — at least until he returns to the Octagon, perhaps early next year.

Meanwhile, Volkanovski is winding up the final days of yet another stint in Australian hotel quarantine in Sydney, alongside coach Joe Lopez, before he takes a well-earned break and reunites with his family.

But Volkanovski’s escape from Ortega’s submission attempts won’t soon be forgotten, and his ability to break free is set to serve as a warning to those who think the Australian has a weakness on the ground that can be exploited.

After the fight was over, Volkanovski reiterated the face that he knew was in trouble.

“It was tight, it was deep,” Volkanovski said of Ortega’s guillotine. “The space I was trying to make — I usually make that space before he’s anywhere near that deep. But credit to him and how quickly he can wrap up the neck and legs, suck his hips right in on your belly. The grips he has, the arch he’s got, the hips are in, the legs where they are positioned and locking my arms, [it was so quick].

“And usually people go for it and I’m already half out by the time they go to the position, but he didn’t give me that chance,” he continued. “He was as deep as you can get. Not many people can do that so I’m going to give him credit. It was deep, very very deep.”

As Volkanovski processed the situation in real time, he was not only trying to escape, but position himself in order to turn his defense into attack.

Volkanovski said it was at that point you saw his legs “start to go wild” as he attempted to push Ortega’s hips higher to reduce the angle, but that the American did a great job of keeping his hips locked in and maintaining a strong hand position.

Then things got a bit hazy for the champion.

“I felt it, it went from almost going different colors and slowing down to like, ‘s—, this blood choke’s deep’,” he continued. “And I’m going to be honest, I could sit here and be like ‘ahh, I was never in trouble’, but that’s not me, I’ve got to be real here. It was close, and it was like ‘oh s—, things are starting to change, this must mean that I’m close to going out’. So that just made me think ‘f— this, I’m doing something’. So I ended up pulling on that arm and shifting it, I made a little bit of space and then everything cleared up and I’m like ‘alright, I’m back’.

Volkanovski said Ortega then tried to move into a D’arce choke, but that his opponent had lost the commanding position. And then came the counterattack.

“That’s when you starting talking about that alpha dog [mentality]; I can’t let him get one up on me, I’ve got to get that payback,” Volkanovski said. “The competitor side of me was like ‘he had me in this position, I’m going to make him pay’. And then me using my brain and thinking he would be gassed from that — 100% he put everything into that. He used legs, hips, core strength, arm strength, and it was in the deepest position and was trying so hard on it. But it guaranteed he was gassed.

“So once I turned I knew that I was just going to rain down bombs on him. I got a bit overzealous and me punching him in the face, obviously doing damage. But he’s got quite a chin, he probably used that [time] to get his breath back.”

With Volkanovski hammering away at Ortega’s head, the American again saw an opportunity. And he was very nearly successful once more at pulling off the submission.

“He ends up throwing up another submission — a triangle, which I saw coming,” Volkanovski said. “I went to arch up, I don’t know if I went off balance a little bit and he turned the angle on me, but I started going up, I was doing the right thing, but then I fell to the side and he grabbed the leg, and had me.

“Again you look at it and it was deep. It wasn’t as deep as the guillotine, but technique wise he did everything right. I was in a bad position. He had me over, he grabbed the leg, he had all the angles, but again I was just making the space, I’m pretty good at making the space.

Knowing the threat of Ortega’s submissions ahead of the fight, Volkanovski credits his camp and training with his ability to maneuver out of the triangle.

“So he got me in the bad angle which I didn’t want to get, but he did a good job. So I pulled on the knee a little bit, pressed on him a bit, sort of laid down to make it harder for his angle and for his legs to get tighter, and that made the space.

“And then he realized it wasn’t on. He tried to get on top, and I just used that to get up. And that was when you saw the last 20 or 30 seconds where again I’m just like ‘you p—-, I’m going to make you pay for that because I know you’re dead after that’. So that’s when I started raining bombs’.”

Volkanovski finished the third round in command, and still doesn’t believe Ortega should have been allowed to continue, such was the shakiness in the American’s legs and for the fact he was helped to his chair.

While the decision to let Ortega fight on has been hotly debated ever since, what there is no conjecture about is Volkanovski’s ability to survive and the dominant position he had assumed thereafter.

It’s now a fight, in particular the third round, that will live long in the memory of UFC fans around the globe. The victory is also sitting proudly in Volkanovski’s psyche. And his confidence has never been higher.

“It’s right up there, it is,” Volkanovski replied when asked if the fight was among the best of his career. “There were hairy moments, you’re just not going to get deeper than those [submission] positions, and for me to get out of that just shows you the type of human being I am.

“It’s scary for people, they look at that and are like ‘how the f— do you beat this guy?’. He’s out-striking the strikers, has [more] volume than the volume strikers, using wrestling against wrestlers, grappling.

“You name it, I’ve beaten all these people at their own game.”