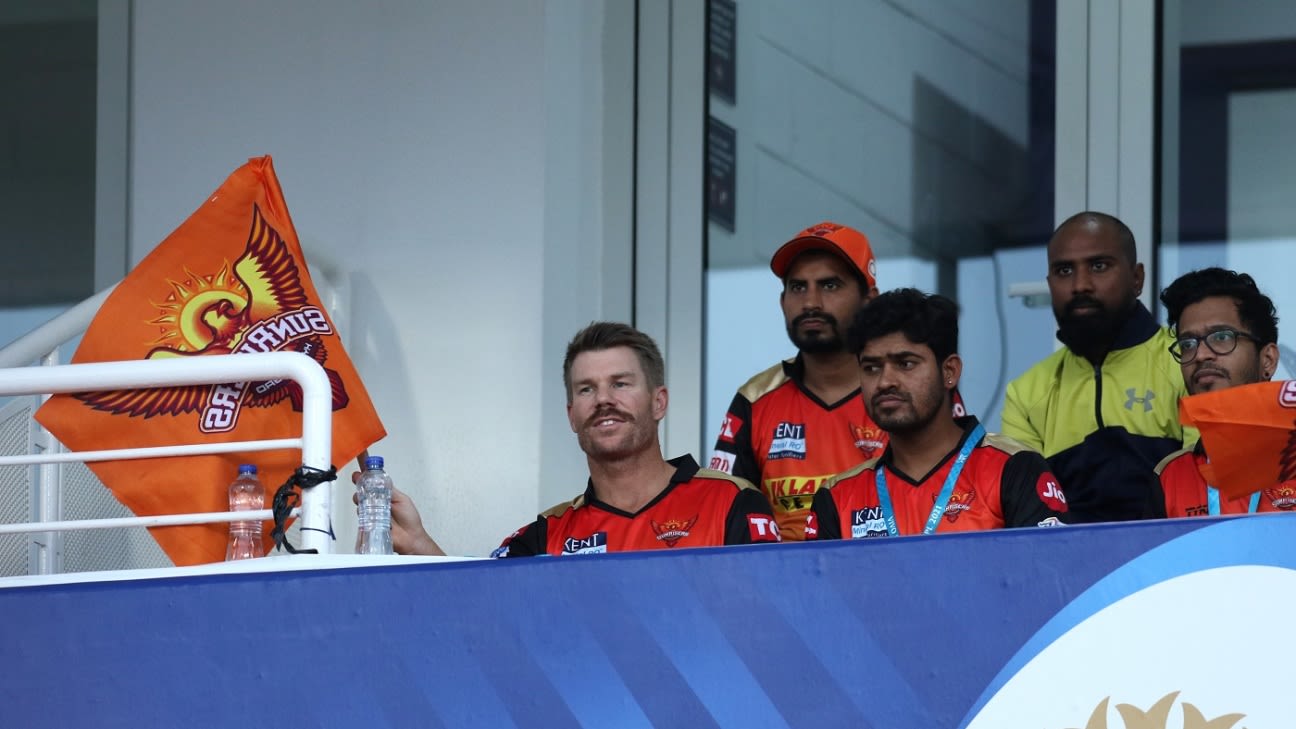 David Warner would love to remain with Sunrisers Hyderabad next season, but he admits that might not happen, after being benched for their last five games of IPL 2021. He insists, however, that his fans will have plenty to look forward to in the “long time I have left”.

Sunrisers removed Warner from the captaincy midway through the tournament, just before the India leg came to a halt because of Covid-19. They replaced him with Kane Williamson, who had first taken over the captaincy in 2018 when Warner was serving a year-long ban for his role in the Newlands ball-tampering episode. During the second leg of IPL 2021 in the UAE, Warner featured in just two of the Sunrisers’ seven games, before being left out altogether.

In one of those games, Warner wasn’t even part of the contingent that travelled to the ground, which led to speculation of a fallout with the team management, before head coach Trevor Bayliss confirmed that he wasn’t the only senior player left behind at the team hotel.

Warner was cagey on what led to his sacking as captain, but he has expressed hurt at how he was treated over the course of the season. Having captained Sunrisers to the 2016 title and scored over 4000 runs for them over eight seasons, Warner felt he needed answers from the team management, but wasn’t sure they would be forthcoming.

Having averaged over 39 in each of his previous seven seasons at the franchise – while striking at over 140 in six of them – Warner endured a disappointing 2021, scoring 195 runs in eight innings at an average of 24.37 and a strike rate of 107.73.

“Look, I’m not 100% sure,” Warner told Sports Today, when asked about what led to his sacking and eventual axing from the team. “With utmost respect for the owners, Trevor Bayliss, [VVS] Laxman, Tom Moody and Murali [Muthiah Muralidaran], when a decision gets made, it has to be unanimous. But you don’t know who is going for you, who wants you the selected, who doesn’t. End of the day you’re told you’re not playing.

“The disappointing thing for me was not being explained why I was dropped as captain. I think if you want to go along the lines of form, it’s a difficult one because I guess whatever you’ve done in the past would have some weightage moving forward, especially when you’ve played 100 [95] games for the franchise.

“I had four bad games, two run-outs in that, on slow and low wickets in Chennai. It’s difficult, a bitter pill to swallow but I don’t think I will ever get answers and must move on. It’s time to look forward, there’s another auction coming up. I’d love nothing more than to represent Sunrisers still, but the decision remains with the owners and what direction the franchise wants to go in.”

Warner seems to have recognised that it’s time to move on from Sunrisers, however – a recent Instagram post in which he thanked the team’s fans for their support over “a great ride” suggested as much.

“Sometimes you get the feeling that you’re not going to be retained by a franchise, with little signs that you could see in and around the group,” he said. “From my perspective, I could see the writing was on the wall, and it was an appropriate time to say thank you [to the fans on social media].”

With the addition of two new teams set to make the IPL a 10-team event from 2022, Warner could become a hot pick at the auction. And he would be happy to take over leadership responsibilities if asked to.

“[Captaincy] is definitely something I love doing,” he said. “It makes me play a lot better, also having had a taste of it in this [IPL] environment makes it easier as well. I shared that role at Sunrisers with Kane [Williamson] a fair bit, it was also great to have other leaders in and around the franchise.

“He [Williamson] was one guy I had a lot of chats with, Jason Holder is another guy. Rashid Khan as well, he has captained Afghanistan. These are guys with whom you can share knowledge and rebound information on and off. I would be thrilled to do that [captain a side] if it came up, it’s all about getting a solid foundation together.

“If it did arise, I’d love to do it. A person of my character can get people up and about. I’m energetic, I call a spade a spade, I would love every individual to perform at their best and hold everyone accountable to their actions.”

No matter which team it’s at, and whether it’s as captain or not, Warner is raring to be back at the IPL next year.

“Obviously I’d love to be part of the IPL in 2022. I obviously started my career at Delhi, played with Sunrisers and yet the final chapter of my career, I still have a long time left in these leagues, and there are plenty of runs left. I’ll be looking forward to whatever opportunities present itself and I’ll give it my 100%.”