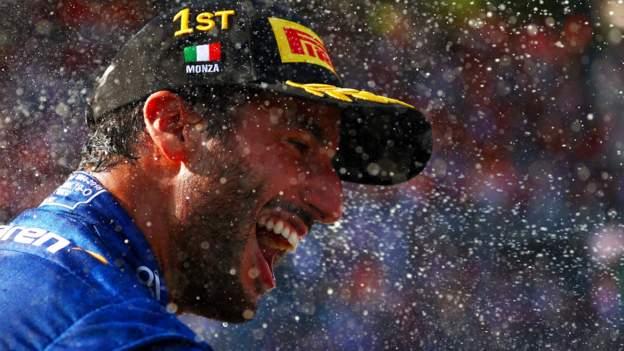 Daniel Ricciardo has not had a lot of sleep since he won the Italian Grand Prix on Sunday – but not because the McLaren driver has, as you might expect, been out on the town celebrating his first Formula 1 victory for more than three years.

“It’s not from partying,” the Australian says. “It’s just kind of the excitement. It’s still running through my mind. And I’ve had an overwhelming amount of love and messages and (contact from) friends back home. It’s been quite cool. So it’s been hard to switch off.”

Now he’s finally ended a drought that dates back to his last win at Monaco in 2018, the problem, Ricciardo says, is “you want to hold on to it as long as you can”.

“I will just replay moments of the race in my head. There are very vivid moments and memories of the race.

“Like, with 10 laps to go and what I was telling myself, what my mindset was, to stay cool. And then the last lap, going for the fastest lap. I didn’t even know what the fastest lap was but I knew there was some grip left, so I was like ‘Let’s just go’.

“I wanted to make a statement. All these things keep me up. There are so many things that happened over the weekend that keep me up.”

Admiration for US Open champion Raducanu

In fact, Ricciardo’s lack of sleep had started even before the race, for he was one of the millions around the world who stayed up on Saturday night to watch Emma Raducanu’s remarkable triumph at the US Open.

It turns out that the 18-year-old is something of a motorsport nut. She loves Formula 1, and Ricciardo is her favourite driver. The admiration is mutual – Ricciardo admits to being swept up in the appreciation of tennis’ new star.

“I love nearly all sports and it’s impressive to see youth perform at such a high level and be able to absorb the pressure, the emotion,” he says.

“I can relate, because when I was 18 years old, I was still a baby. I was still pretty immature. So to put yourself in her shoes and be on that stage and not be phased by it, I think so many people are just in awe of that.

“She has done it very gracefully as well, and done it with a smile, and that’s really warming to people.”

Gripped by the match, Ricciardo stayed up much later than would be normal on the eve of a grand prix.

“I watched a few of the interviews after the game and I remember looking at my phone and it was 12.45am when I finally tucked myself into bed,” he says. “But it was cool to see.

“And then the Sunday, it was awesome to be back there. It had been a while, but so much of it was a familiar feeling. That was the most rewarding part, that it didn’t feel forgotten. I felt calm throughout and I was just excited to be leading a race again and to be in that position.”

A long road back to the top step

In many ways, Monza was redemption for Ricciardo, for it has not been an easy year for the man famous for his million-watt smile and jokey character.

His two years at Renault after leaving Red Bull at the end of 2018 did not bring the rewards he expected. But, as an A-lister, when he joined a resurgent McLaren at the start of this season, he was expected to take off immediately.

Instead, he struggled with the car through the first half of the year, and was generally outshone by team-mate Lando Norris, who has been one of the stars of the season.

It’s these toils that explain the desire Ricciardo felt to go for that fastest lap at the end of the race on Sunday.

It had been a consummate drive. After beating Max Verstappen’s Red Bull away from the grid, Ricciardo controlled the race from the front. Norris and others were never very far behind, but the leader was going only as fast as was needed to keep them at bay. The fastest final-lap time was Ricciardo’s way of making sure people understood what was going on.

“It was to remind people that I haven’t forgotten (how to do it),” Ricciardo says. “I was in control and I just wanted to show it was the last lap and I am not feeling any of the nerves or pressure so I am going to do my fastest lap of the race on the last lap, just to remind people, ‘I got this'”

Perhaps this desire was enhanced, too, by a couple of radio messages from Norris during the race, when he implied that he could go faster than Ricciardo, and wondered in a not-especially-indirect way whether the team should let him try to do exactly that.

Ricciardo says: “There was one lap in particular, not long after the restart (following the crash between Verstappen and Lewis Hamilton) when I let him get too close and I probably gave him the impression I was maybe not that fast. And I think that’s when he probably said ‘I want to try and attack Daniel’.

“I could see in my mirrors, Turn Two into Curva Grande and into the next chicane, he was probably even closer than I let Max get at the start of the race.

“I was like, ‘OK, I don’t need to be saving (tyres) this much, so then I kind of turned it up a little bit. With the restarts and the craziness of the racing these days, I was always trying to save a little bit, just in case there was another restart. Could I have won by 20 seconds? I’m not saying I could have, no, but I was just doing what I had to.”

The benefits of a vacation

Ricciardo’s season has turned around since F1 had its summer break in August. Ricciardo had a disappointing time at the final race of the first part of the season in Hungary, and straight after getting out of the car sat alone with his thoughts for some time.

He went away to his beloved LA for a holiday, and has seemed a different driver since F1 reconvened at the Belgian Grand Prix at the end of August, the first of three races on consecutive weekends.

He qualified fourth at Spa, and ‘finished’ there after the race was cancelled because of torrential rain, then was fifth on the grid at the Dutch Grand Prix. And then came Monza.

“It was a real blessing to have the forced break,” Ricciardo reflects. “The first half of the year, because I was struggling to get up to speed, I had no choice but to dive deeper into it, to try to learn and figure it out.

“I never really had a chance to remove myself from it and take a breath and even just mentally switch off. Part of the struggle was I was putting so much into it and not really getting much reward, so that was a bit of the frustration with the first half of the year.

“So, getting away, getting out of Europe, and getting those two weeks to forget about F1, it made me come into Belgium (and) even (in) Friday practice, I felt more calmness and confidence driving the car. It just felt better. I came in with a renewed energy and a little bit about me was back.”

A team on the up

If Ricciardo had a long wait since his last win, it was nothing compared to that of his team. McLaren’s last victory was at the final race of the 2012 season in Brazil, thanks to Jenson Button. And for their most recent one-two, you had to go all the way back to the Canadian Grand Prix in June 2010, when Hamilton led Button across the line.

Since then, McLaren have been through the mill.

A major decline in performance coincided with Hamilton leaving the team for Mercedes for 2013. A partnership with engine supplier Honda started badly in 2015, and was dissolved after three frustrating years on both sides.

And the advent of Renault engines in 2018 – the same ones Ricciardo and Verstappen were at the time using to win races for Red Bull – laid bare just how far McLaren’s cars had fallen from the pace.

Since then, the team have been on an impressive recovery drive, led by chief executive officer Zak Brown and team principal Andreas Seidl, and this year they are in a close fight with Ferrari to finish third in the constructors’ championship, a position McLaren currently hold.

McLaren have known this year there was still a significant gap to the leading two teams, but that a victory was potentially on the cards if there was ever a race in which Mercedes and Red Bull hit trouble – as all four cars did at Monza to one degree or another.

As such, the one-two was an endorsement of the work they have been doing, but also unexpected and surprising.

“That’s where I’m so pumped that I could be a part of it and help bring this first win in a long time to fruition,” Ricciardo says.

“That makes me so happy and excited because I see what it means to everyone. People can see my emotion on the podium, but there are people who have been at this team a long time, long before even I started racing, and the last eight or nine years there has been drought.

“So to come back, and especially for the ones that have stuck through the thick and thin, it’s awesome. It’s cool.

“I’ve obviously had some personal struggles with the team this year from the performance point of view, but now to come out of that with this result, it makes me appreciate what I have at this team and playing a part now is quite fulfilling.”