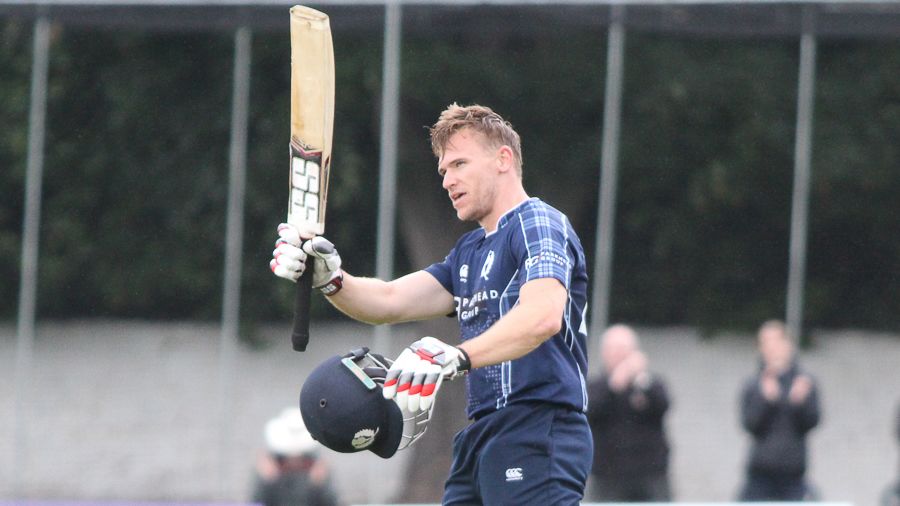 Zimbabwe fall short despite Williams, Shumba getting them within touching distance

Richie Berrington and Safyaan Sharif saved the day for Scotland as they took a 1-0 lead in the three-match T20I series against Zimbabwe in Edinburgh on Wednesday.

First, Berrington steadied a floundering Scotland innings – they lost four wickets inside the powerplay – and then provided the finishing touches as well. Then Shariff rocked Zimbabwe by removing the openers early on his way to a four-for.

In all, Berrington made 82 off 61 balls, which accounted for more than half of Scotland’s total, including seven fours and three sixes. Matt Cross’ 14 was the next highest score.

Zimbabwe lost openers Wesley Madhevere (golden duck) and Tadiwanashe Marumani (3 off 9) by the third over, before Regis Chakabva and Craig Ervine, the captain, revived the innings briefly. Then they fell in quick succession to leave the chase delicately poised at 58 for 4 in 10.3 overs.

Zimbabwe didn’t let these setbacks trouble them as Sean Williams and Milton Shumba, the top scorer with 45, put them back on track with a 54-run stand that left them needing 30 off 21 balls. Then Williams perished as Alasdair Evans struck gold. The blow was a sucker punch to Zimbabwe as they huffed and puffed through to the end, finishing seven runs short.

The second T20I will be played on Friday at the same venue.

Casey O’Neill has found her feet in the UFC — and the ‘amazing’ donuts of Las Vegas
Padres put Snell on IL, sign Velasquez to minors
Sources: Seattle to host 2023 MLB All-Star Game
The Met Gala: From Simone Biles and Serena Williams to Steph Curry, athletes show out on the red carpet
Patriots-Jets rivalry goes to Gen Z at QB: Mac Jones, Zach Wilson