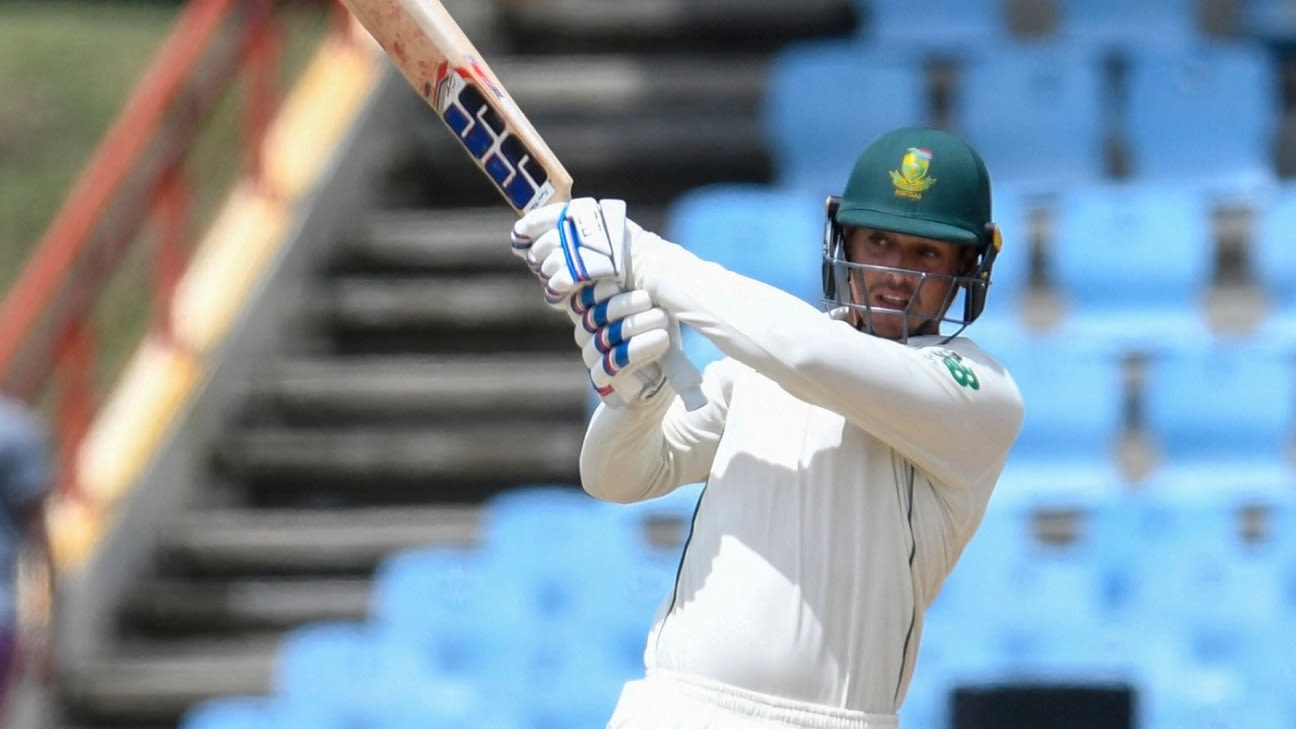 Quinton de Kock fell four short of a second successive century in the series and Kagiso Rabada scored a 23-ball 21 to take South Africa to a shade under 300 in St Lucia. West Indies will be relatively pleased with their morning’s work, especially in conditions not as favourable for bowling as they were on the first day. After the initial period of resistance by de Kock and Wiaan Mulder, five wickets fell for 59 runs, with Kemar Roach and Kyle Mayers claiming three apiece and Shannon Gabriel, Jayden Seales and Jason Holder ending with one each.

de Kock added 37 runs to his overnight score, including a majestic pull off Holder for the first boundary of the day, and shared in 36-run stands for the sixth and seventh wickets to ensure some part of the lower order frustrated West Indies. But his dismissal came in the middle of a collapse of four for 23, which allowed West Indies to keep South Africa under 300.

West Indies v South Africa is available in the US on ESPN+. Subscribe to ESPN+

West Indies took the second new ball immediately as play began, half an hour late after a morning shower, and shared it between Seales and Holder. Seales had an lbw shout against Mulder in his second over, which was turned down, and replays showed the ball was missing leg stump, but that was the closest the bowlers got to making a breakthrough.

It was only when Roach was introduced that West Indies got their first wicket. He angled a delivery in towards Mulder, who moved forward to defend and outside-edged to Joshua da Silva.

Mulder’s dismissal gave West Indies a glimpse of the South African tail and they may have fancied their chances of running through when Roach almost had Keshav Maharaj caught behind flashing outside off in the next over and Gabriel beat Maharaj’s inside-edge and almost shaved off stump and then had a confident appeal for lbw against him. Maharaj was hit on the front pad as he pushed at a full delivery and though replays confirmed no bat was involved, ball-tracking showed it was just clipping leg stump and the umpire’s call meant Maharaj could bat on.

Maharaj hung tough as de Kock took the score past 250, rotated strike well and survived another chance – a stumping, when he advanced out of his crease to drive Roston Chase but missed. So did da Silva. Maharaj’s time ran out when he tried to drive Holder as the ball moved away from him and he was caught behind, sparking a mini-collapse.

Holder beat Rabada with his next delivery and appealed and reviewed for caught behind but replays revealed no contact between bat and ball, but West Indies did not have to wait too long for another wicket. Mayers, who had removed Dean Elgar late on the first day, got de Kock to slash at a wide delivery and edge to Shai Hope in the gully.

Two overs later, Mayers struck again when Anrich Nortje tried to flick him over midwicket but chipped it to Seales, who was perfectly positioned for the chance. Seales had to move to his left and took an excellent diving catch to extend the first session by half an hour.

Rabada made the most of the extra time and drove Gabriel in the air before top-edging him over the slips to prolong the last-wicket pair’s time at the crease. It only lasted until two minutes before the new lunch time when Lungi Ngidi lobbed Roach to midwicket.