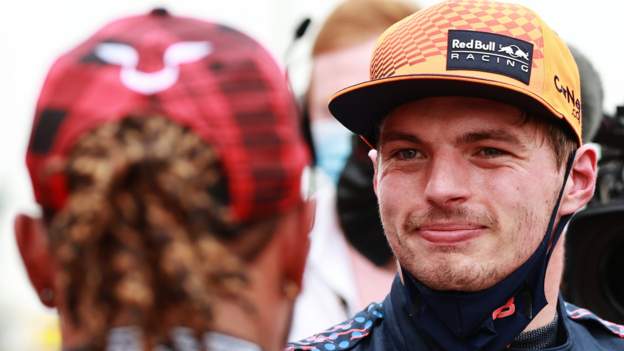 The stage is set for another head-to-head battle for victory between Max Verstappen and Lewis Hamilton after the pair qualified alongside each other on the front row for Sunday’s French Grand Prix.

Verstappen will start from a pole position convincingly won in his Red Bull at Paul Ricard, having beaten Hamilton by a quarter of a second on Saturday. The Dutchman heads into the race four points ahead of the Mercedes driver and keen to make amends for the tyre failure that cost him victory in Azerbaijan two weeks ago.

That collapsing left-rear tyre – and an almost identical failure earlier in the Baku race on Lance Stroll’s Aston Martin – continues to cast a shadow over Formula 1, and this weekend it has even intruded into the battle between Hamilton and Verstappen.

Insiders say the pair had a disagreement on Friday as the drivers discussed tyre safety and related matters with Pirelli, governing body the FIA and F1 in a 90-minute meeting.

What was the meeting about?

The backdrop was the tighter tyre-operating protocols imposed on all teams this weekend, after Pirelli blamed the failures suffered by Verstappen and Stroll on the “running conditions” of the tyres. And beyond that the drivers’ wider concerns about the repeated pattern of occasional tyre failures over the past several years.

Red Bull and Aston Martin had found a way to keep the pressures of their tyres lower in the race than the tyre company had expected, Pirelli F1 boss Mario Isola explained in a news conference on Thursday.

They were still above the minimum starting pressure limit Pirelli sets to guarantee the structural integrity of the tyre, he said, but below the level they had been calculated to reach when the car was out on track.

“We assume running at a certain pressure with margin will be OK for the tyre,” Isola said. “In that case, we did not achieve the conditions [required], not because the teams were doing something against the regulation but because they were looking for performance and that created a different scenario. And that was the tyres were running at a lower pressure than expected. And that created the failure.”

What happened between Hamilton and Verstappen?

In Friday’s meeting, Hamilton wanted to know why teams were not being punished if they had broken the rules. He was told by the FIA that there was no evidence of any rule breaking, only of lower than expected pressures during races.

Verstappen – as he did in media interviews on Thursday – pushed back at the suggestion his team had been doing anything wrong.

There was some back and forth between the pair, a number of witnesses said. Was it an argument, or an indirect exchange of opposing views? It depended upon whom you spoke to.

In the news conference after qualifying, the title contenders were asked whether they had any problems with anything that was said in the meeting.

Hamilton said: “I don’t have any problems with what was said in the meeting. I was surprised things needed clarifying [on the rules] because we thought it was clear. But clearly not, and I am grateful the FIA have clarified the steps people need to take and I am glad they are putting things in place to make sure policing is done better. That’s all we can ask for.”

Verstappen replied: “I am happy everything is better policed but I am still not happy with the explanation of what happened in Baku because I don’t think it’s fully clear, at least for people outside… fans.

“I know what happened. The team knows what happened. But it is very confusing what they [Pirelli] put out. But it’s fine – life goes on, we just keep on going and hopefully from now on we can just be safe in the car and nothing happens.”

Up and down the pit lane, the difference in opinion between the two biggest names in the sport was reflected among the teams.

Some felt that Red Bull and Aston Martin had been playing around in a manner which compromised driver safety, given everyone knows that Pirelli use pressure to control the integrity of the tyres.

Others said that they did not believe that, because there is so little room for manoeuvre with tyre pressures, and that some of the implications in an FIA technical directive as to what was happening – such as removing water vapour from the air in the tyres to lower pressure – have been going on for years, and everyone knows about them.

There is also a concern at the lack of clarity about exactly what caused the failures.

McLaren chief executive officer Zak Brown said: “We need – especially when it comes to safety – total transparency from Pirelli and the FIA so we can understand exactly what happened to make sure from a safety point of view it doesn’t happen again.

“They didn’t explain in detail what happened. We are all left kind of guessing at what we think happened. We have a general idea but then Pirelli and the two teams certainly don’t seem to be aligned. So we need to understand what happened.”

Some even suggested that the whole explanation provided was a smokescreen aimed at helping Pirelli save face.

A new tyre on the way?

Pirelli is sensitive to criticism – Isola became noticeably upset in the meeting, witnesses say, when Aston Martin driver and four-time champion Sebastian Vettel made pejorative comments about the quality of the tyres – but it takes the drivers’ concerns seriously.

It is working on addressing the issues around thermal sensitivity – which prevent drivers from pushing flat out in races and which have been a bugbear for the drivers for years – for the new, lower-profile tyres that are being introduced next season.

For this year, it introduced tyres of a more robust construction aimed at avoiding the failures that were seen at the British and Tuscan races last year.

Despite that, even before the Baku failures, Pirelli has also been investigating a revised design that could be introduced this year to further strengthen the tyres.

This tyre, a Pirelli spokesman said, is ready to be tested, and discussions are ongoing with the FIA on that topic.

This could happen as quickly as within two to three weeks, Pirelli said, if there was a collective desire to pursue it.

But it is a complex decision because introducing a new design of tyre is not a simple matter. It would impact car behaviour and the teams would have to adapt their cars to that.

This would increase costs. And while that is always a concern, it is an even bigger one this season. It is the first year of the new budget cap, when the top teams are already struggling to keep their budgets down to the required level, and at the same time teams are working on completely new cars for the new rules that are coming into force next season.

Then again, as Hamilton put it: “Safety is so important. We are seeing more and more of these incidents and we have to make sure we work towards not having those in the future.”