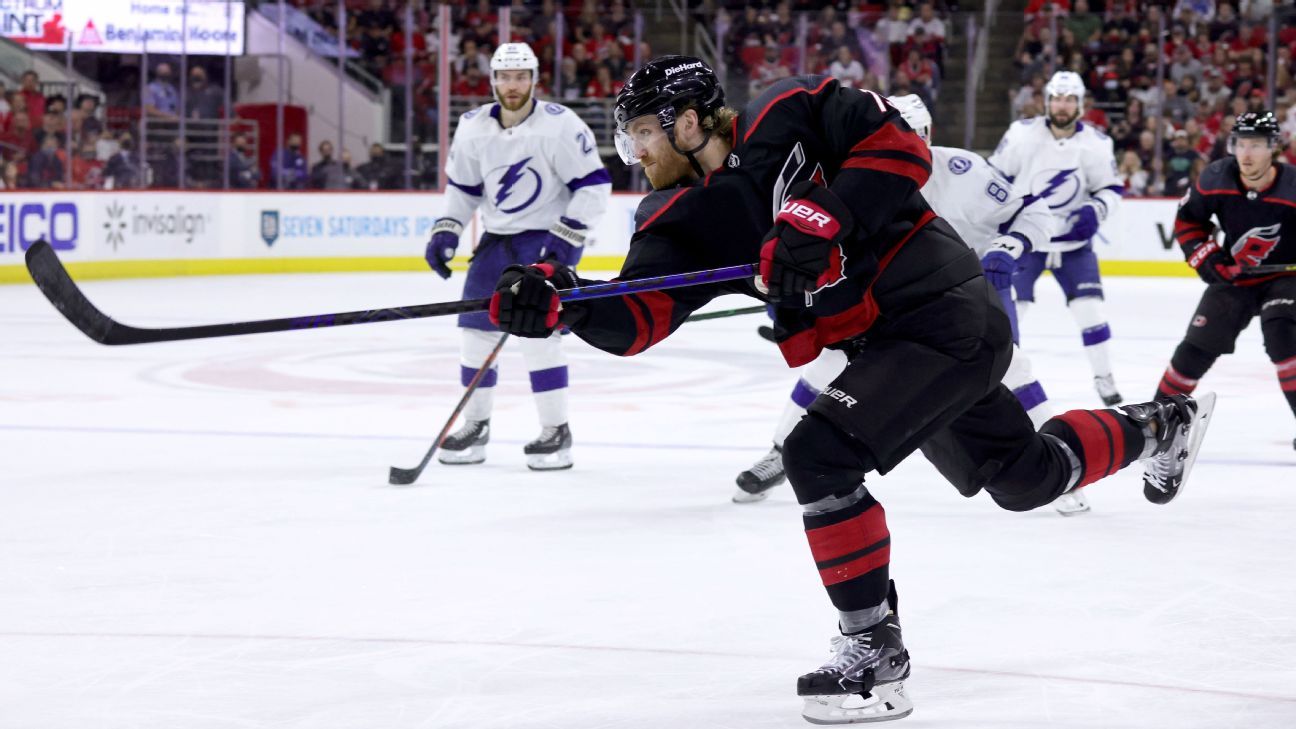 The Carolina Hurricanes would like to re-sign unrestricted free-agent defenseman Dougie Hamilton. But Hamilton and his reps believe the market will produce a contract offer richer than what the Hurricanes want to spend on the talented 28-year-old.

In an unorthodox move, the Hurricanes gave Hamilton their blessing to find out if that opportunity exists, well over a month before the start of free agency.

“We’ve had discussions with Dougie and his representation. There’s a difference of opinion right now. So we can either wait until July 28 and then if we’re unable to sign him, he can walk away for free. So maybe if he finds out that there is something out there that makes sense, we can trade him and pick up an asset. Or we still have the opportunity to sign him,” said Carolina GM Don Waddell this week.

Hamilton will have his suitors, to be sure. He was eighth in scoring among defensemen this season, with 42 points in 55 games. He’s long been an analytics darling, pushing play and helping the Hurricanes dominate in puck possession. Since 2018-19, Hamilton has 52.3 expected goals scored above average, second among all defensemen.

“The door is wide open here. We love Dougie. He’s been good for this franchise. We’re certainly all hoping that he comes back, but we didn’t want to wait until July 28. So we got a head start on it,” said Waddell.

If Hamilton finds the contract he’s looking for now, here’s how it could play out:

Hamilton gets his deal. Team X gets Hamilton. The Hurricanes get a little something for the effort.

But Hamilton isn’t the only top-tier, right-side defenseman potentially available. Columbus Blue Jackets star Seth Jones has one year left on his contract, and has declared that he’ll test free agency after next season, fueling speculation that he could be traded this offseason. That said, Jones will probably generate more in a trade given the year left on his contract; Hamilton, if it’s not a sign-and-trade, might not.

Where might Dougie Hamilton be skating next season? Here are 11 possible destinations worth considering:

There’s strong speculation around the NHL that the Blackhawks are going to add a significant piece to their back end this offseason. Having a top-pairing defenseman would enable them to reduce the role of Duncan Keith, which is ideal for him at this stage of his career. They’re going to have a lot of cap space opened this summer — remember Brent Seabrook and Andrew Shaw have both hung up their skates, so that number above will rise — which puts them squarely in position for a run at Dougie.

The availability of Seth Jones complicates things: His agent Pat Brisson represents Patrick Kane and Jonathan Toews, and reportedly has a solid relationship with GM Stan Bowman. But Jones has another year on his contract, while Hamilton could be had without trading a significant return.

Remember last offseason, when the top defenseman available (Alex Pietrangelo) was replaced on his old team (St. Louis) by the second-best defenseman available (Torey Krug)? The odds that the Blue Jackets trade Jones and then sign Hamilton are long, although it would mean he could slide next to Zach Werenski on the top pairing — that’s not a bad place to be. But the Jackets seem like they’re going to enter a downcycle that wouldn’t include breaking the bank for a veteran free agent.

The Panthers and Hamilton seem like an ideal match, although it would take some roster reconfiguration; namely, finding a way around Keith Yandle‘s no-movement clause to open up his $6.35 million in cap space. Going from Jaccob Slavin to MacKenzie Weegar as a defense partner would be, in some ways, a lateral move for Hamilton. Yes, Weegar’s that good. This would also be the kind of low-key market that might appeal to Hamilton — like the one he’s in now.

Another offseason, another offensive defenseman potentially on the Oilers’ radar. Tyson Barrie was a nice one-year fix for Edmonton, but far from the long-term solution Hamilton could provide. Assuming they re-sign Ryan Nugent-Hopkins, Edmonton will still have considerable cap space to work with this offseason, and could create even more of it. A James Neal buyout, coupled with right-side defenseman Adam Larsson leaving as a free agent, and that’s Hamilton’s cap hit right there. But it takes two to tango: After his last stint with a team in Alberta, does he want to go back?

The Kings are still emerging from their rebuild, and hence have considerable cap space heading into the offseason. They have Drew Doughty on the right side, and that could be a boon to Hamilton, who’s a better No. 2 defenseman. GM Rob Blake knows a thing or two about offensive defensemen. Hamilton would bolster the Kings’ back end, right at a time when the team is looking to turn the corner back to contention. Sometimes you just have to strike when the free-agent opportunity presents itself: Ask the Rangers how signing Artemi Panarin before the rebuild was “over” worked out for them.

Best Game
• Sweep for the Jets?

The Devils have 13 players signed for next season, with open cap space of nearly $38 million. P.K. Subban has one more year left on his deal, and Damon Severson has two more on his, but that shouldn’t deter the Devils from adding Hamilton to their defense corps. He plays the kind of up-tempo offensive game the team wants to play, and one assumes an analytics-driven front office appreciates his virtues. Rumors are that the Devils were speaking with the Buffalo Sabres about adding Rasmus Ristolainen to their defense. Spend the extra $3 million annually and sign Hamilton instead. Or, just don’t trade for Ristolainen.

The Flyers’ blue line never recovered from the sudden retirement of Matt Niskanen before the 2021 season, and they have a glaring need on the right side. It’s expected the Flyers are going to make a significant push for either Hamilton or Jones. Philadelphia has just over $12 million to work with in offseason cap space, with the expectation that the Seattle Kraken may open up a bit more in the expansion draft. The speculation is that Jones is the preference here, as he is a more “complete” player who carries a lower cap hit ($5.4 million), for next season at least.

Why Seattle? It’s not the Ron Francis factor; he was gone from the Hurricanes before they traded for Hamilton in 2018. But a numbers-driven front office no doubt values what Hamilton can bring to the team. There’s another benefit, too: As reported by The Athletic, a player acquired by Seattle prior to the July 21 expansion draft will still be able to sign an eight-year max contract with the Kraken prior to the opening of free agency on July 28. No sign-and-trade necessary. It’s expected the Kraken are going to approach Year 1 in the same manner the Vegas Golden Knights did theirs: Acquiring a number of veteran assets on expiring or short-term contracts through the expansion draft and in trades, that they can turn into future assets. Unless, like Vegas, they suddenly transform into a Stanley Cup contender in their inaugural season.

A seven-part, behind-the-scenes docuseries going on and off the ice and in locker rooms for an all-access pass during the pursuit of the Stanley Cup. Watch on ESPN+

GM Kyle Dubas has reportedly coveted Hamilton through the years. There was a report that he asked for Hamilton from the Hurricanes during trade talks involving Leafs goalie Frederik Andersen before this season — which was shut down. Given the Toronto salary cap situation, there’s really only one path to acquiring and signing Hamilton: Trading away 27-year-old defenseman Morgan Rielly, who makes $5 million annually and is entering the last year of his contract. It’s a path they should consider, as Hamilton’s the better player.

The Jets have never recovered from losing four of their top six defensemen two offseasons ago. So one primary focus this summer will be building up the defense corps. “We’re looking for that improvement on our back end, but we all know that,” said coach Paul Maurice. Two solutions could come internally: Prospects Ville Heinola and Dylan Samberg, who along with veteran Josh Morrissey could be a solid left side. Adding Hamilton to the right side would give the Jets their best offensive defenseman since Dustin Byfuglien.

The last thing the Hurricanes want here, I think, is for the process to play out for too long.

Let’s say they make Hamilton an offer. He thinks he can do significantly better than on the open market. Carolina moves on to Plan B, whatever that might be. Hamilton discovers that the marketplace under the flat salary cap isn’t want he believed it was, and tries to go back to the Hurricanes — but they’ve already moved on.

Instead, the Hurricanes have given themselves and Hamilton just enough runway to figure things out if he discovers the deal he’s hoping for isn’t there.

Postgame analysis and highlight show airing each night throughout the season from Barry Melrose and Linda Cohn. Watch on ESPN+

All of this traces back owner Tom Dundon. He’s a tough negotiator. You saw it with coach Rod Brind’Amour, and you’re seeing it with his assistant coaches. Hamilton’s the same deal. His camp believes they know what Hamilton’s worth. Dundon says “go out and prove it.”

Not only that, Dundon says “go out and prove it” at a time when teams probably aren’t prepared to commit wholly to a contract like the one Hamilton is seeking — especially before they see what players might become available around the expansion draft. There may not be another Dougie Hamilton. But maybe there’s a player who is 75% of Dougie Hamilton — at a considerably lower cap hit and term — who suddenly is on the market.

The signal is clear here from the Hurricanes: This is our timeline. We’re not twiddling our thumbs until July 28. If you want to play in a city you like, for a defense on which you excel and with a coach who appreciates your gifts, then do your due diligence and then come back to get this done.

The Hurricanes are there if Hamilton wants them.

Unless someone wants Hamilton more, that is.