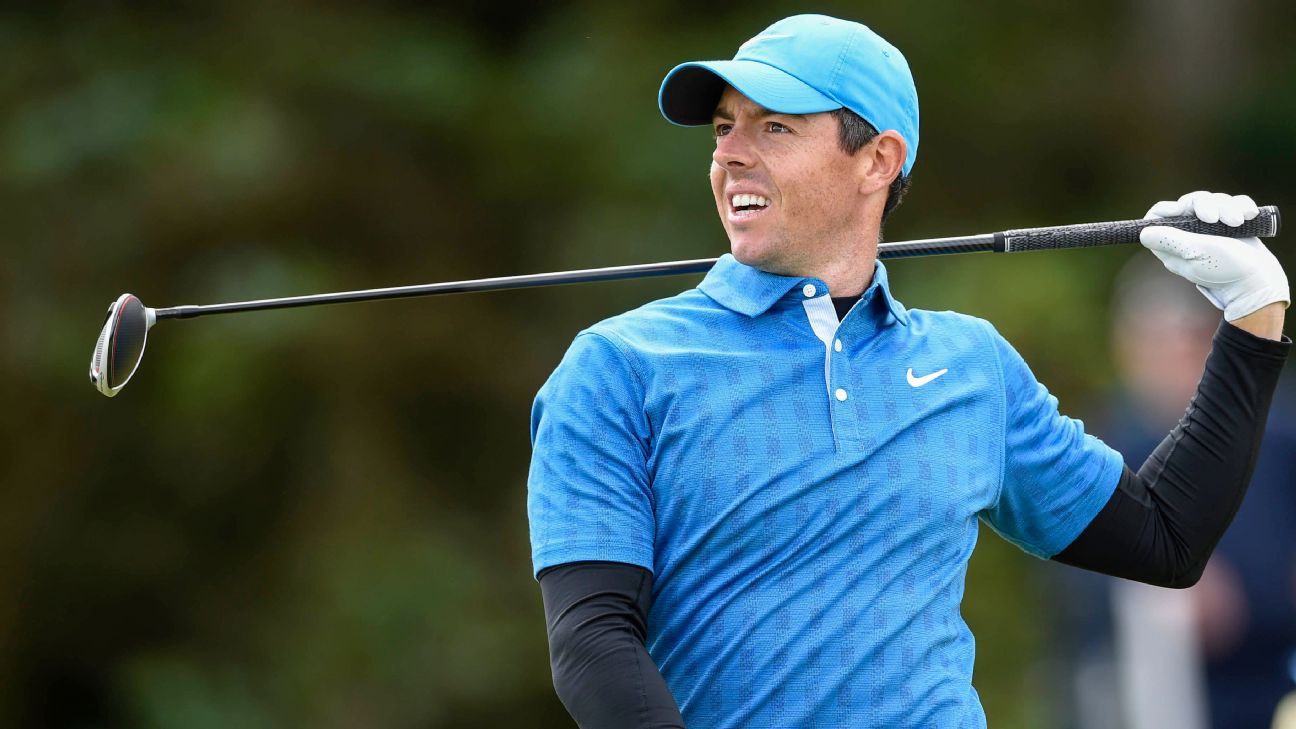 Max Homa, winner at The Genesis in February, is the defending champion at Quail Hollow Club.

Which players are the favorites this time around, who offers good odds and what props are worthwhile?

Bearman: Quail Hollow is just as tough as Copperhead last week, and it’s even longer. So a tough, long, hard course that takes good ball-striking to win? Enter DeChambeau, the PGA Tour’s leader in shots gained off the tee, tee to green, overall and driving distance. What could hurt him this week is he is 136th on tour in driving accuracy, settling for more distance than precision. The poor accuracy contributes to his middle of the pack greens in regulation percentage, another important stat to winning the Wells Fargo.

That being said, he finished fourth in his last appearance here in 2018 and plays well on long tracks. He is 15th on approach this year, so if he does hit the fairways, he tends to hit the greens. Doing that more often this week could end in a DeChambeau runaway, but if he sprays the long stick, it won’t work out. At 14-1, I’ll take my chances among the favorites instead of laying 9-1 with Justin Thomas‘ cold putter or Jon Rahm, who has only played here once (when it hosted the PGA Championship in 2017).

Bearman: Full transparency — I did not want to go here. Rory badly missed the cut at The Players and The Masters and didn’t make it out of group play at the match play. It has been a good two months since we saw McIlroy play well, with a T-10 at the Arnold Palmer, but that ended with a final-round 76. All that being said, there isn’t a track that Rory does better on than Quail Hollow. The all-time money winner here is the lone two-time winner, taking the title in 2010 and 2015. Sure, that was a long time ago, but he also has seven top 10s in nine appearances, including a T-8 when last played in 2019, a T-4 in 2016 after his 2015 win, and a loss in a playoff to Rickie Fowler in 2012.

Let’s not forget that before his bad play began at Sawgrass, he had five top 10s in the previous 10 worldwide events. He’s still fifth in shots gained off tee and 20th in tee to green, and we know when he’s on he’s one of the best ball-strikers on tour. We have not seen him at all since Friday at the Masters, so hopefully he has figured something out in the month since then. If there ever was a course that would right the ship for him, it would be this one.

You don’t often see McIlroy at 18-1 anywhere, and although his recent play would make you think the odds should be longer, it’s still a good price for a guy who owns this course. The ultimate battle of recent form vs. course history will be on this play in North Carolina this week.

Marks: Give me a guy who is a member at the golf course he is competing at every day of the week and twice on Sunday. Simpson knows the intricacies of this track and will be sleeping in his own bed every night.

Putting is the top metric that matters this week, and Simpson ranks 13th in strokes gained putting this season. Simpson is also first in scrambling, first in bogey avoidance and fifth in driving accuracy. In his own backyard, this is his tournament to lose. I also have him at 30-1 to be the leader at the end of the first round and at -125 (at DraftKings) in matchup play over Viktor Hovland.

Bearman: The guy didn’t record a top 10/20 last week, so stop taking him, right? No. Despite not having his “A” game, Conners still managed a T-21 last week at the tough Copperhead track. He had some spurts, closing Friday’s round with three birdies in his last seven holes, but ultimately could not put it all together to get us the usual cashed ticket. But I am not running away, as he still has seven top 10s in 19 events this season and is eight in shots gained off the tee, ninth in tee to green, 10th in approach and 11th in total. He is also eighth in both driving accuracy and in greens in regulation, two important metrics at Quail Hollow.

His putting let him down last week and is the biggest reason he hasn’t won this season. It’s only his third time teeing it up at this event, but the metrics match the long, tough course, so I am sticking with him. If he can continue accurately getting it off the tee and hitting greens, we are hoping his flat stick shows up.

Bearman: Of all the longer shots out there, Grillo’s game fits the Quail Hollow track the best. He is third on tour this season hitting greens, at 73 percent. Not only does he hit greens, but he’s also fourth on tour in proximity to the hole, making his putts much shorter. He’s also 32nd tee to green and ninth off the tee. And he has recent success here, finishing T-9 in his last appearance in 2018. Grillo comes into the event playing well, posting top-6 finishes in Punta Cana and the RBC. He missed the cut last week at the Valspar after a second-round 76 ruined his opening 66. At 60-1, it’s worth a little sprinkle.

Marks: This will be the newly-engaged Zalatoris’ first go at Quail Hollow, but playing events for the first time hasn’t been an issue for the Wake Forest golfer. I usually play him in the top 20, but his metrics scream success on this track. He is eighth in strokes gained tee to green, 20th in driving distance, fourth in approach and T-22 in bogey avoidance this season.

Bearman: Despite his T-13 finish last week at Copperhead, JT isn’t playing well enough to only get 9-1 on your money for the win. Do I think he can win? For sure … he won his only major here in 2017 and led the field in tee to green last week in Tampa. However, outside of his win at Sawgrass in March, Thomas had not been able to put his entire game together, with only one other top 10 on the card since the Masters last November (third at a small field at Sentry). His putter has let him down, as he is 92nd in putting this season. Being third on tour in tee to green and having won here in 2017 is what gives me hope for a top 10, but there is not much value at 9-to-1 to win the way he is putting. He will be a candidate for a live play over the weekend if you see his putter get hot, just like it did at Sawgrass in March.

Marks: Rahm comes in with eight top-10 finishes in his last 10 starts, and his game fits this track to a tee. The fact that he has both the distance and accuracy stands out. Rahm is fourth in strokes gained tee to green, T-3 in strokes gained off the tee and 17th on approach. For the straight forecast, I have Rahm and Xander Schauffele to finish 1-2 (and vice versa) at 170-1 (at DK).

Bearman: Quail Hollow’s length and toughness line up well for Finau, who is sixth in tee to green and 11th overall in strokes gained. I just can’t take him to win until he shows me he can. What he can do is give us another top-10 finish and win a matchup or two. He has finished in the top 11 seven times this year, including his T-10 at the Masters last month. He played well for three rounds at the Zurich two weeks ago with partner Cameron Champ, holding the 36-hole lead, before a poor final round sunk another chance for Tony. That has been the pattern for a few years now, so play him to win and go low on Thursday and Friday and hope he hangs on for the 2.5-to-1 payout on the top 10.

Marks: Niemann comes in hot after finishing T-8 at the Valspar. He is 15th in strokes gained tee to green, eighth in driving distance, seventh in bogey avoidance and 27th putting this season. Putting will be crucial this week, and Niemann’s putter is dialed in at the moment. I also like Niemann (-159 at DK) in matchup play over Jason Day.

Marks: Bradley is the hottest golfer coming into the Wells Fargo, finishing second at the Valspar, with only one round in the 70s — unfortunately, coming on Sunday. He is fifth in strokes gained tee to green and seventh in approach this season. I also have Bradley (-125 at DK) over Rickie Fowler in matchups.

Marks: Conners has crushed the Florida swing and heads to North Carolina with the majority of his game checking all the Quail Hollow boxes. If his putter cooperates, we can consider him to finish in the top 20. He is ninth in strokes gained tee to green, eighth in driving distance and bogey avoidance and 10th in strokes gained on approach this season.

Marks: Grillo missed the cut last week after an impressive first round. I’m not fading him, considering he has had a few extra days to work out the kinks. This is a ball-strikers course, and Grillo is one of the best on tour, sporting +21 strokes gained off the tee and +23 on proximity from 200 yards out in his last 24 rounds.

Marks: Cink does well on this track, with three top 10 finishes. He is long off the tee (ranked T-27) and is fifth in bogey avoidance this season. Let’s hope his son, Reagan, who caddied for him in his win a couple of weeks ago, is back on his bag.

Kaulig Racing moves to Cup Series in 2022
Bowman signs 2-year extension with Hendrick
MMA pound-for-pound rankings: Two ex-champs stake their places in men’s and women’s top 10
Dan Marino on Tua Tagovailoa leading Dolphins to a Super Bowl: ‘I hope he does’
Which redshirt freshmen can break out in the 2021 college football season?