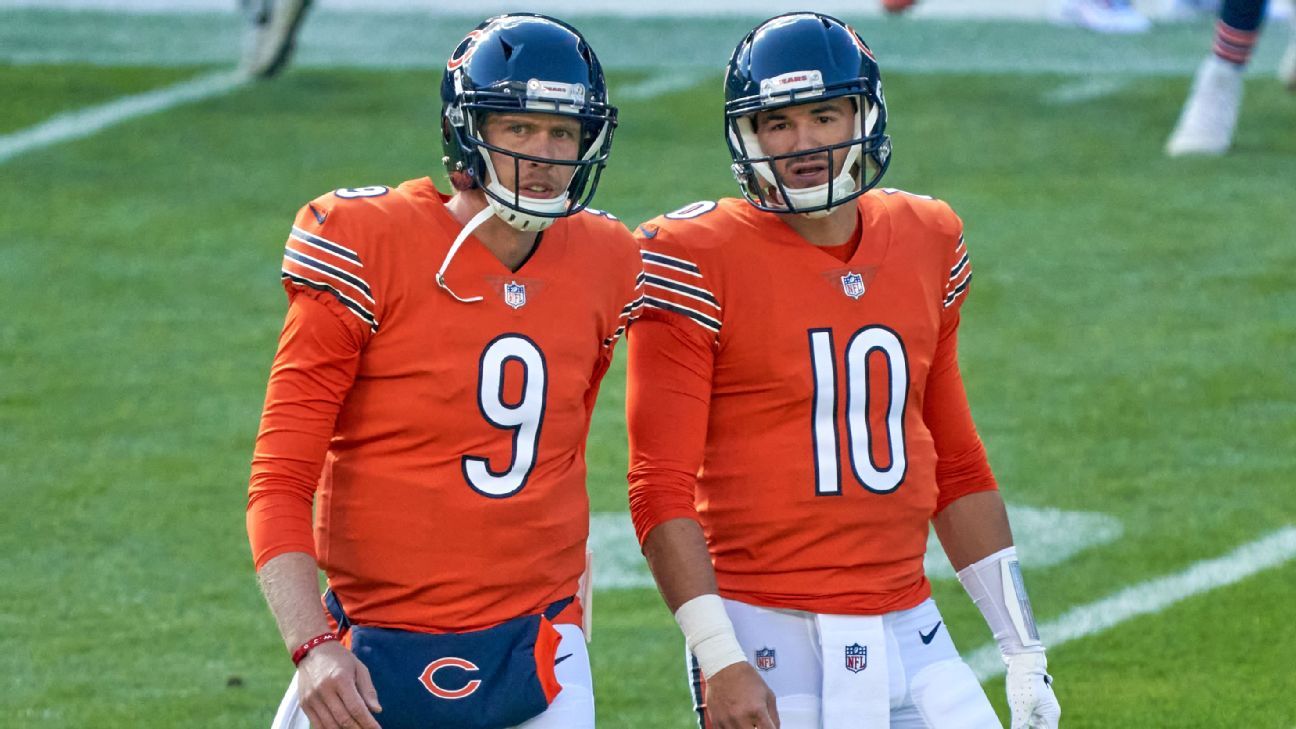 LAKE FOREST, Ill. — The Chicago Bears‘ never-ending search for a franchise quarterback could have another chapter after general manager Ryan Pace declined to say that the team intends to re-sign 2017 second overall pick Mitchell Trubisky.

“As far as the plan at quarterback, to get to where we want to go, we definitely need more out of that position,” Pace said Wednesday after he and coach Matt Nagy were given a vote of confidence.

“Everything is on the table.”

Trubisky’s future in Chicago has been tenuous ever since the Bears traded for veteran Nick Foles last April and declined Trubisky’s fifth-year option a little over a month later.

Trubisky went on to win the starting job over Foles to open the season, but Nagy benched Trubisky, 26, in favor of Foles in Week 3.

An injury to Foles — coupled with ineffective play — opened the door for Trubisky to return to the starting lineup in late November, and he helped Chicago revive its playoff hopes with three straight wins versus Houston, Minnesota and Jacksonville.

The spark that Trubisky provided proved fleeting. The Bears lost at home in Week 17 to Green Bay. Chicago backed into the playoffs and the NFC’s seventh seed courtesy of the Rams’ victory over the Cardinals in the regular-season finale but then had a dreadful offensive performance in the playoffs versus the Saints.

Overall, the Bears dropped eight of their final 11 games after having begun the year 5-1.

Still, Trubisky expressed a willingness to return to Chicago next season, telling reporters in the aftermath of the season-ending loss to New Orleans that he had “unfinished business” with the team.

That may be so, but the Bears made no promises Wednesday to extend Trubisky or apply the franchise tag. Instead, Pace and Nagy spoke at length about the importance of improving the position that has been a problem for the Bears since Hall of Famer Sid Luckman retired in the 1940s.

In recent times, Pace infamously traded up to draft Trubisky over Patrick Mahomes and Deshaun Watson in 2017. Mere weeks before obtaining Trubisky, the Bears signed free-agent quarterback Mike Glennon to a deal that included $18.5 million in guarantees. The Bears pulled the plug on Glennon after just four starts and were forced to prematurely usher in the Trubisky era.

“Why do we feel strong about getting that position right?” Pace said. “It goes back to the connected vision I share with Matt.

“I just have a lot of confidence in the unity we have as coaching staff and personnel department, but mainly that Matt and I have at attacking that together.”

Foles, 31, is the only Bears quarterback under contract for next year. The veteran will count approximately $6.6 million against the 2021 salary cap.

• Pace said star pass-rusher Khalil Mack is unlikely to require offseason surgery to repair the shoulder injury that bothered him much of the year. Mack still led the Bears with nine sacks.

• The Bears are hopeful veteran pass-rusher Robert Quinn can have a bounce-back season in 2021. Quinn, who signed a deal last offseason that contained $30 million in guarantees, recorded just two sacks for the Bears. Pace all but conceded that Quinn will return in 2021 — largely because his salary next year is fully guaranteed.

“We expect him to rebound,” Pace said. “I think having an offseason being with us, I think that will bode well for him. Together with him and with us and our plan, we have to find a way to help him get more production, and I believe that he will.”

• Nagy announced that the search to replace retiring defensive coordinator Chuck Pagano will begin in earnest. Nagy does not believe Chicago’s current predicament will prevent outside parties from having interest in the position. Nagy has two years left on the five-year contract he received to coach the Bears. Pace has one year left on the three-year extension he signed in 2018. Bears CEO and president Ted Phillips said neither Nagy nor Pace received any additional years on their contracts after Chicago’s 8-9 finish.

• Pace remained noncommittal about the future of wide receiver Allen Robinson, who will be a free agent unless the Bears use the franchise tag. The Bears and Robinson’s agent were unable to come to terms on a long-term deal during the season, and talks eventually broke off. Robinson, 27, led the team with 102 catches for 1,250 yards.

“You know how we feel about Allen, how respected he is in the building,” Pace said. “But to get into specifics on his contract, you guys also know I’m not going to get into that. In regard to the franchise tag, I would just say everything is on the table. The league gives us tools for a reason, but right now we’re just going to keep all those talks internal out of respect to Allen, out of respect to his agent. I just think those are best handled in a private manner.”

• Nagy punted when asked whether he intended to reclaim offensive playcalling duties next season. Nagy insisted that offensive coordinator Bill Lazor served as the team’s primary playcaller for the final eight games. Nagy, however, declined to say whether he plans to carry over the arrangement into next year.