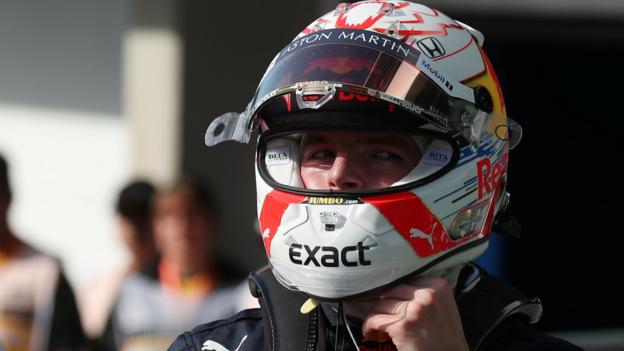 It was Dutchman’s second career pole, although he qualified fastest in Mexico two races ago before being penalised for failing to slow for caution flags.

Leclerc has a 10-place grid penalty as a result of excessive engine usage.

Verstappen was on course to win this race last year before a crash with a backmarker allowed Hamilton to slip through, but now has a powerful chance to make amends.

Verstappen was fastest after the first laps in final qualifying, despite a big wobble on the exit of Pinheirinho, a left-hander in the middle of the lap.

He improved by more than 0.1secs on his final run to lockdown his first pole position since the Hungarian Grand Prix in August.

“The car was really good,” Verstappen said. “From Q1 the car was flying and really enjoyable to drive. Really happy with this pole position.”

Vettel said: “I had a bit of a wobble at the exit of the last corner on the first run, but Max improved his time (on his second run) so fair play.

“I am happy with the front row and now we see what we can do (in the race).

Vettel is concerned about the fact that Ferrari lagged behind Mercedes and Red Bull for pace when doing their race-simulation runs in Friday practice, although he said another on Saturday morning had gone better and “that gives us hope”.

“Both Red Bull and Mercedes look a bit stronger managing tyres,” he said, “but we are there for a reason – we have the speed, we have the power. We’ll see what we can do.”

Verstappen’s first pole turned into a race-long battle with Hamilton in Hungary, which the Mercedes driver eventually won, and this one could well go the same way.

Hamilton was cheered by the Brazilian crowd as he held up his helmet, featuring a special design as a tribute to his childhood hero and Brazilian F1 legend Ayrton Senna.

He said: “Congrats to Max, obviously a great lap by him. We seemed quite competitive in P3 (final practice) and then we seemed to lose – or they gained – when we got into qualifying.

“But I’m really happy I was able to divide the Ferraris. I gave it everything I had. My best lap of the session was the last run, so awesome.”

Leclerc, like Vettel, was left to rue a mistake on his first run, also at the final corner.

The 22-year-old had been up on team-mate Vettel until running wide at Juncao and costing himself at least 0.2secs in the final sector, which would have put him ahead of the German.

Instead, he will now start the race from 13th place and a fight through the field.

NBA Power Rankings: Can anyone catch the Suns and Warriors?
Bold predictions for the end of 2021 in MMA, including a defining moment for Rob Font
Thanksgiving’s SEC-ACC rivalries — and family feuds — renewed one year later
Sources: LSU hiring Kelly away from Notre Dame
Ymer brothers lead Sweden’s upset of Canada