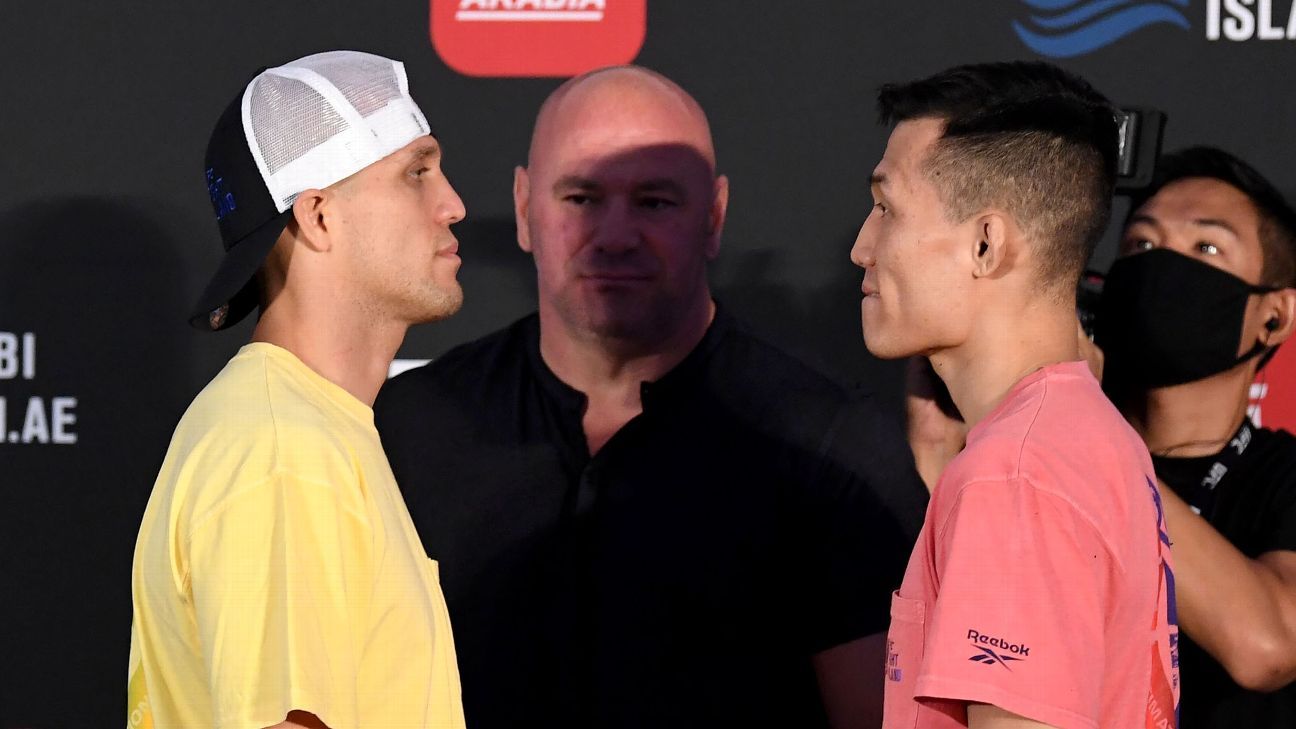 A pair of former UFC title challengers will collide on Fight Island on Saturday night as Brian Ortega takes on Chan Sung Jung, also known as the Korean Zombie, at UFC Fight Night in Abu Dhabi. Dana White says the winner of this bout will receive the next shot at Alexander Volkanovski‘s featherweight title.

Ortega (14-1) returns to the Octagon for the first time since a failed title bid at UFC 231 nearly two years ago. He was easily defeated by then-champion Max Holloway at that event, and while making his comeback he suffered a partial ACL tear that sidelined him further. Jung (16-5) will look to solidify his second shot at a UFC championship. He fought Jose Aldo for the 145-pound title back in 2013.

All fights from UFC Fight Night: Ortega vs. Korean Zombie will be available to watch on ESPN+.

Watch the complete card on ESPN+

This fight is filled with bad blood and a saga that escalated earlier this year at UFC 248. After a number of false starts, we finally will get to see these two go at it with incredibly high stakes on the line.

Brett Okamoto and Jeff Wagenheim recap the action as it happens.

Once his opponent engaged in a fight, Grishin ended it, using a barrage of punches as Round 2 was winding down to get the finish at 4:58 for his first UFC win.

These veteran Russian light heavyweights had trained together at American Top Team in Florida, so Grishin was well aware of Antigulov’s reputation as a fast starter. But on this night, Antigulov did not come out firing, so much of the first round played out as a staring contest.

But when Antigulov, a 33-year-old from Dagestan, came out aggressively for the second, and even took the fight to the canvas, Grishin responded, getting out of a submission attempt by reversing position, then getting back to his feet and going on attack. As Grishin fired away with punches against the cage, Antigulov did no more than cover up. The referee twice asked Antigulov to fight back before stepping in.

Grishin, 36, is a former PFL fighter who saw a nine-fight winning streak end in July in his UFC debut, a decision loss to Marcin Tybura.

For Antigulov, this was his fourth UFC loss in a row, although in the others he had been finished in the first round.

Watch this fight on ESPN+.

UFC bantamweight Said Nurmagomedov does not need much of an opportunity in order to knock an opponent out. That much was on full display on Saturday.

Nurmagomedov recorded his third win in the UFC in emphatic fashion as he knocked out Mark Striegl with ground-and-pound just 51 seconds into their bantamweight contest. Nurmagomedov (14-2) dropped Striegl with a counter left hand that didn’t even appear to have much on it. Nurmagomedov was stepping backwards and looked off-balance as he threw the punch, but it was a perfect shot to Striegl’s temple.

Damn what a performance for Said Nurmagomedov! Vicious ground and pound 👏🏽👏🏽👏🏽 #UFCFightIsland6

After Striegl (18-3) went down, Nurmagomedov jumped on him with follow-up strikes that quickly ended the fight. It’s his second knockout in the UFC, and seventh career finish overall.

Nurmagomedov fights out of Russia but is not related to undefeated lightweight champion Khabib Nurmagomedov. He is now 3-1 in the UFC. His loss came via unanimous decision to Raoni Barcelos in December.

Watch this fight on ESPN+.