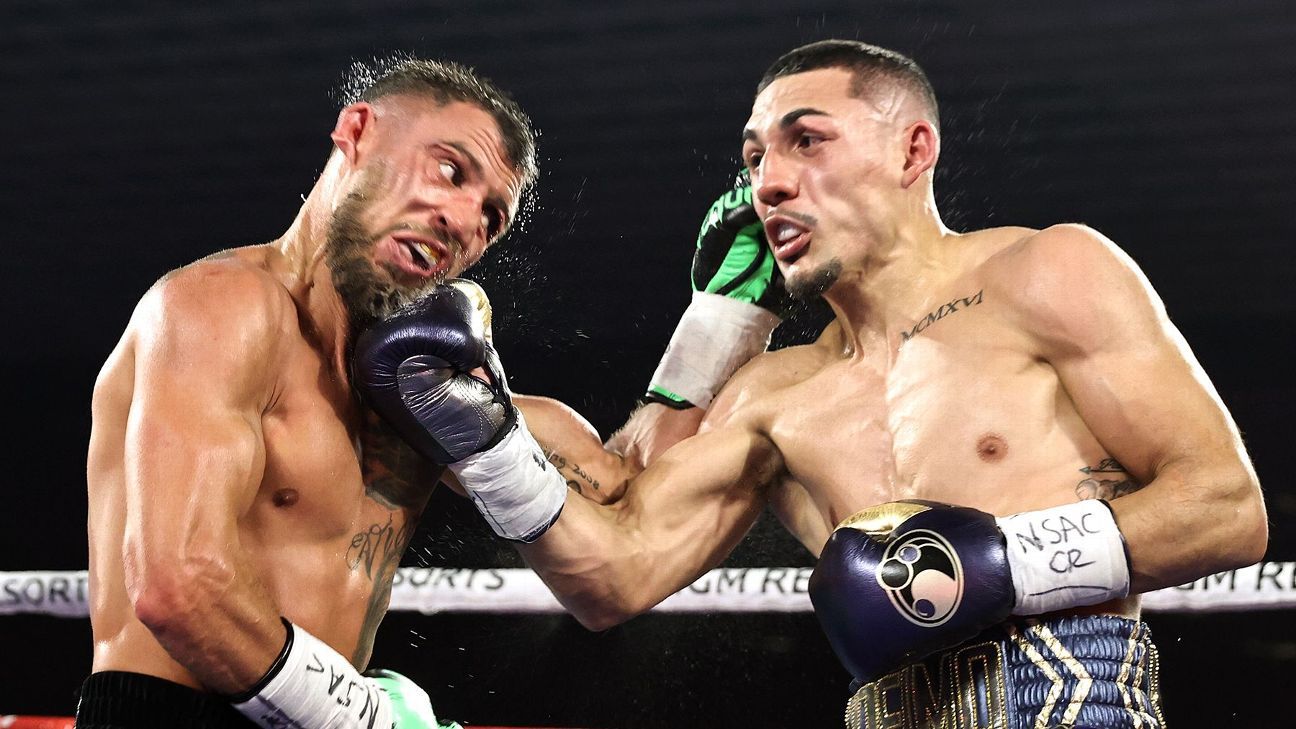 On a night full of top-tier college football matchups and MLB championship games, it was Teofimo Lopez Jr.’s upset victory over Vasiliy Lomachenko that stole the night. The last six rounds, in particular, were some of the best championship boxing rounds that we’ve seen in a long time.

Lopez walked away recognized as the undisputed lightweight champion of the world, defeating the No.1 pound-for-pound boxer in the world. But boxing was the biggest winner.

The sport has a new 23-year-old superstar in Lopez. His performance should usher in a new fan base and a new era built on young fighters ready take on all the smoke, instead of waiting years for megafights to happen with hopes of protecting their undefeated records.

Lopez showed that he was willing to take a risk in the most unusual of situations. There was no crowd inside the bubble at the MGM Grand for the fighters to feed off, but the tension in the championship rounds was so thick it was hard to breath watching the final two rounds. Every punch could’ve been a knockout as knees buckled and 100% muscle went into their haymakers.

Ultimately Lopez recovered from a couple of bad rounds and withstood the valiant comeback from Lomachenko, who waited far too long to bring his pressure and aggressiveness to the center of the ring. Lomachenko paid for that miscalculation, but boxing didn’t. We all were rewarded in those final six rounds of elite action.

It wasn’t just the main event, either. Puerto Rican super middleweight prospect Edgar Berlanga earned a new audience of fans with his 15th consecutive first-round KO, and like Lopez, he’s the type of boxer that can be a crossover star.

The hope is that this new fan base will come back for another fight night and believe that is the new reality of boxing. A new audience is waiting and it is up to the sport to hold up its end of the bargain: make these sort of fights the norm, not the exception.

Teofimo Lopez breaks down his unanimous decision victory over Vasily Lomachenko, saying he had to dig deep if he wanted to win. He also previews what could be next for him.

But now we look ahead. What’s next for Lopez and Lomachenko?

Lopez is the new king of the lightweight division and can call his shot. He’s a big lightweight who isn’t long for 135 pounds so he’s probably best to take one or two more fights at lightweight before moving up to 140 where Top Rank has a host of challengers he can face.

The name I want to see Lopez face up next is Devin Haney (24-0, 15 KOs), the WBC champion who is the only person that could have a slight argument to Lopez’s undisputed lightweight crown (Lopez now holds the WBC “franchise” belt). But any of the trio of young undefeated lions in the lightweight division (Haney, Gervonta “Tank” Davis, Ryan Garcia) would be superfights worth putting on a center stage. That’s what boxing needs.

If Lopez needs to move up, a showdown between the winner of the eventual junior welterweight unification fight between titleholders Jose Ramirez and Josh Taylor would also be must-see TV.

For Lomachenko, I want to see him back in action quickly rather than taking another long layoff. Lomachenko looked like he had too much rust waiting too long for action in the early rounds, and if his hunger is still there he should drop back down to junior lightweight to hunt titles.

Names that make the most sense for Lomachenko is the winner of the Miguel Berchelt-Oscar Valdez bout, Shakur Stevenson or Leo Santa Cruz. — Cameron Wolfe

Will the weight be Lopez’s biggest challenge?

The question is just how long he will be able to keep making 135 pounds effectively. After a strong start, he did fade a bit before showing a real fighter’s instinct by understanding he needed to close the show, and by having one of his best rounds in the 12th. He left no doubt that he should’ve had his hands raised in victory Saturday night.

But he will soon be at 140 and without having to work so hard to make weight. With him getting bigger and stronger, Lopez will be every bit the formidable fighter at junior welterweight as he is at lightweight, and maybe even better. Lopez is a boxing prodigy. This could be just the beginning of a very special ride. — Steve Kim

Should Edgar Berlanga start thinking about getting rounds? How important is the KO record?

At a certain point, Top Rank and Berlanga’s management would love to find out what they really have in Berlanga and and match him with a real contender. They have attempted to get rounds by having him face durable veterans, but he has demolished them all. The KO record is a nice marketing tool, but in the big picture it really doesn’t matter. The goal is to develop a real fighter.

It’s time for Berlanga to start headlining his own cards against tough opponents. Until then, we’ll have to settle for watching that knockout streak go up. — Steve Kim

Is Barboza a real contender at 140 pounds?

Barboza is a solid, all-around fighter. After Josh Taylor and Jose Ramirez meet to unify the junior welterweight division, there is a chance that the winner moves up in weight and there will be vacant belts all over for Barboza to fight for. There’s no reason to think that on any given night that he can’t win one of those belts. Regardless, he’ll be in good, entertaining fights for years to come, just as he showed against the experienced Alex Saucedo on Saturday. –Steve Kim