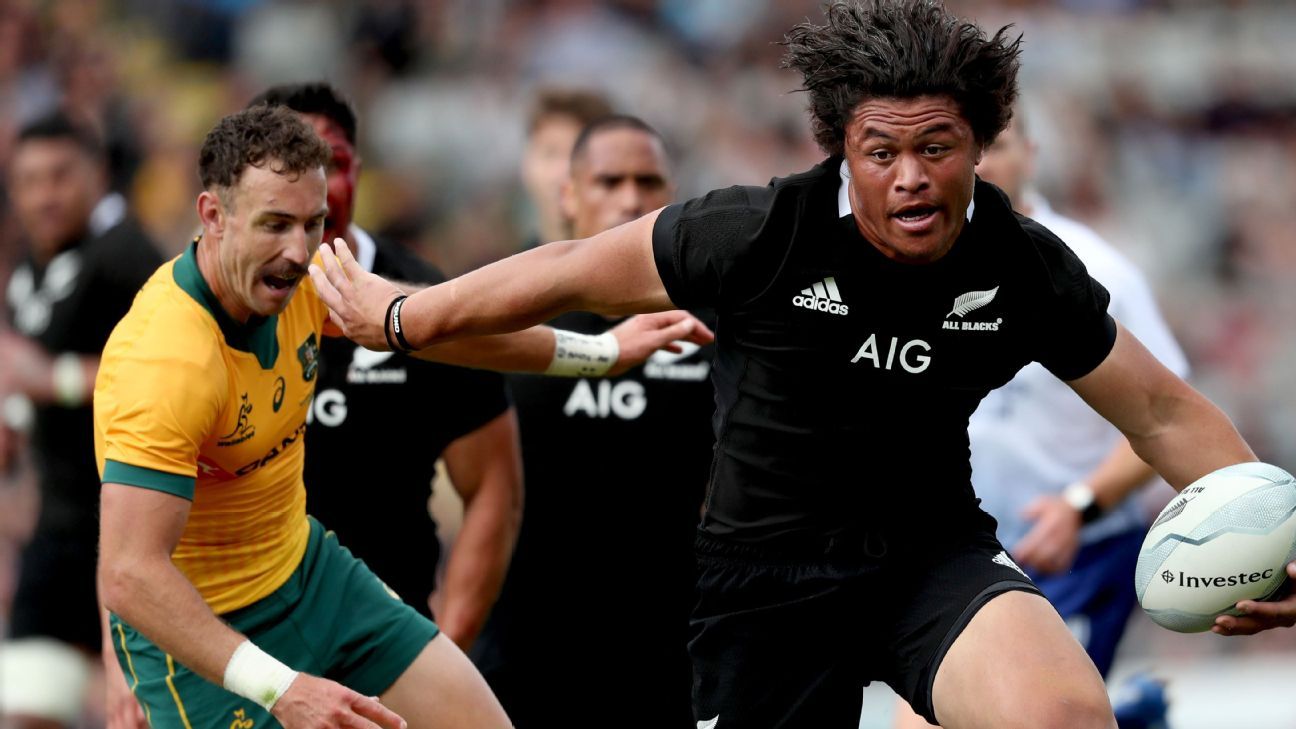 We knew the All Blacks’ response would come.

But it was inspired by perhaps an unlikely source as winger Caleb Clarke announced himself on the world stage with a brilliant tackle-shredding display New Zealand’s 27-7 win over the Wallabies on Sunday.

The 20-point victory — which extended New Zealand’s unbeaten streak at the venue against Australia into a 35th year — means the All Blacks need only one win across the Tasman to retain the Bledisloe Cup. And it has sent a Wallabies side back to the drawing board after they had gone within a whisker of upsetting their great rivals in Wellington seven days ago.

All is not lost for Australia, but their work-ons ahead of Game III in Sydney are clear. And much of it has to do with rugby’s fundamentals after they were found wanting badly in a few areas that should be their bread and butter.

But this was Clarke’s day.

On the same field where Jonah Lomu, the game’s first global superstar, first announced himself as a teenager, Clarke continued his graduation from sevens star to Super Rugby weapon and, as of Sunday, a bona-fide Test player who has the potential to obliterate defences all over the world.

The Blues winger, and son of All Blacks great, Eroni, whose picture was flashed up on the big screen at Eden Park just about every time his son skipped through some flimsy Wallabies defence, was far too hot for the Australians to handle at Eden Park.

Clarke finished with an astonishing 12 tackle busts across his eight runs, which netted 138 metres and three clean breaks, and genuinely had the hosts on the front foot whenever he touched the ball.

“Caleb’s strong, he loves to play, he gets a smile on his face and we’re just trying to get him the ball occasionally and he’s pretty useful,” All Blacks coach Ian Foster said, in a somewhat matter-of-factly manner, after full-time.

The Wallabies were, however, their own worst enemy at times. The Australians kicked aimlessly to Clarke and invited him to carry the ball back at them with all the pace and power that he could muster. And that is no small amount.

Clarke was the strike weapon in a backline that also welcomed the return of Beauden Barrett and got far more from centre Jack Goodhue this week as well.

The All Blacks were also far more physical than the team that was lucky to escape Sky Stadium with a draw last week. They again gave the Wallabies trouble at the breakdown but there was a greater energy in their carries as the likes of skipper Sam Cane, flanker Ardie Savea and hooker Dane Coles all led from the front.

But the All Blacks’ performance was by no means perfect, either.

Had it not been for the scrambling defence of Richie Mo’unga and Anton Lienert-Brown who combined to deny Marika Koroibete, and had Brandon Paenga-Amosa resisted the urge to reach out and get penalized for a double-movement following a dominant Wallabies’ maul, then the closing quarter could well have descended into something that resembled last week’s thriller.

But three tries in just 14 minutes after the break proved the decisive factor. The All Blacks are masters of capitalizing on a shift in momentum and they certainly returned from the interval with greater intent than their opponents after the difference had been just three points at half-time.

“We were a lot more accurate weren’t we,” Foster told Sky Sport. “There were too many errors in that first half that gave them too much possession and they are good with that. But a lot more intention in the contact area and plus we carried on our set-piece work that we started last week.”

Wallabies coach Dave Rennie will be wise to build on the positives, which are clearly evident in the attacking shape his side is playing with and one that which is genuinely asking questions of the All Blacks’ line. They were also more assured at the set-piece themselves. But there will also need to be a decent rollicking as some of the defensive work the Wallabies dished up on Sunday afternoon belonged in club footy back in Australia.

Rennie’s men missed 40 tackles from 146 attempts for an efficiency of just 73 percent. Those are not the numbers of a team that is going to beat the All Blacks.

They also committed five more turnovers than their hosts, though both teams are probably still showing the signs of rustiness, it must be remembered, in what was only their second outing for the year. The Wallabies certainly weren’t helped by the loss of Matt To’omua early in the second half either.

“It’s pretty simple, too many errors and we didn’t tackle well enough,” Rennie told Sky Sport when asked where his side’s performance had differed from last week. “What you know is that if you turn the ball over against the All Blacks, and if you don’t defend well, you’re going to get hurt. That’s pretty much the tale of it.

“Both sides turned the ball over a lot; I just think a bit of decision-making really [let us down]. We defended poorly and tackled poorly and they put us under a lot of heat. We had some opportunities, second half, to score, and if we’d taken them maybe we were in the race late. But not to be.”

The Bledisloe Cup series now heads to Sydney where the equation is certainly in the All Blacks’ favour, but not in a fashion that so many fans would have expected it to be — that being that the trophy is still on the line.

The Wallabies of course will need to be victorious in both Sydney and Brisbane if they’re to wrestle back the Bledisloe for the first time since 2003, the All Blacks needing just one further win to have it remain in safekeeping in New Zealand.

They’ll all be keen to catch a glimpse of Clarke, the team’s latest potential superstar, while Australia’s supporters can head to the Olympic precinct with the quiet confidence that their team is building under Rennie.

Sunday’s 27-7 was certainly a step backwards for Australia but in no way were the issues such that the team can be written off. They certainly need to find a way to stop Clarke, and holding onto a few more tackles would be a decent start.