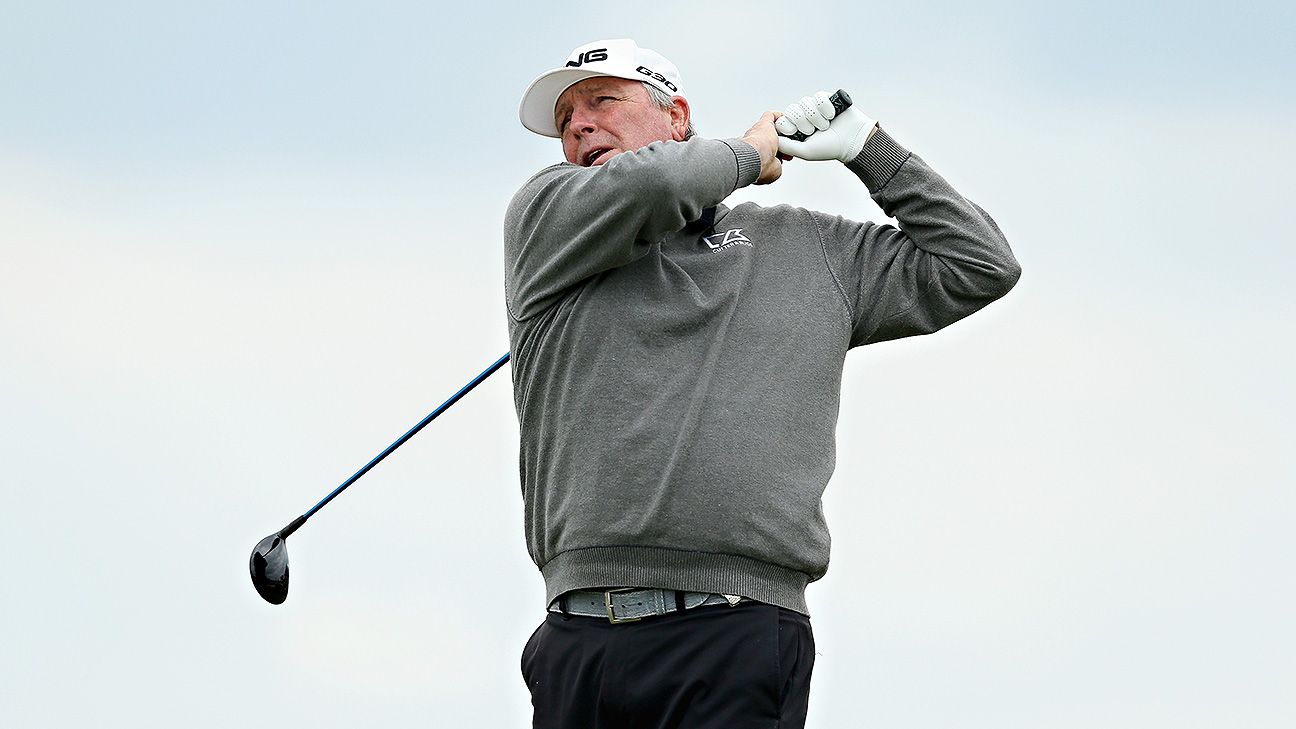 Mark Calcavecchia played golf Thursday, which seems simple enough, as he is a professional golfer. But this was different. Much different. It was the first time he teed it up since testing positive three weeks ago for COVID-19.

The PGA Tour Champions player decided he felt well enough to venture out to Tequesta Country Club near his home in Jupiter, Florida.

“I was pretty much exhausted after playing six holes, and we were riding carts,” Calcavecchia said in a phone interview. “But I got through all 18. And I’ve got some stamina to build up.”

Calcavecchia, 60, who won the 1989 Open at Royal Troon and a total of 13 PGA Tour events as well as four more on the Champions Tour, is glad to be venturing back after an ordeal he said was “miserable.”

Calcavecchia can’t pinpoint where he picked up the virus. And he said the fact that his wife, Brenda, nor any of the people he played with on a weeklong golf vacation in Nebraska (including two-time U.S. Open champion Lee Janzen and tour pro Scott Dunlap), never contracted COVID-19 is “a minor miracle.”

Like all players under the PGA Tour umbrella, Calcavecchia was required to take a COVID-19 test during an off week from the tour. He did so on Sept. 3 when he was in Nebraska, a “spit test” that has to be sent to the testing company.

The results came back on Sept. 6, the Sunday prior to the Sanford Health International, as Calcavecchia and his wife were making the five-hour drive to the tournament in the couple’s RV. Brenda’s results were negative, but Mark’s said, “Detected.”

“It was a stunner,” Calcavecchia said.

He had a swab test administered upon arriving in Sioux Falls, South Dakota, for the tournament, and again Brenda’s results were negative while Mark’s were positive. They considered staying in Sioux Falls with the hopes of Calcavecchia being cleared to play the following week’s event at Pebble Beach, California.

But because Brenda Calcavecchia would not have been permitted to go to California under the circumstances, they decided to head home — to Florida. It was a trip of more than 1,700 miles, and the journey was hellish, Mark Calcavecchia said.

“She doesn’t like driving the thing, and I’d be a nervous wreck if she did so I drove the whole way,” he said. “We left on the Tuesday of the tournament week, and when I finally got home, it was bad. Initially I just had some sniffles, which I thought were allergies.

“As each day went on, I started to feel worse and worse. And when I got home, it was like all the fenders coming off a car. It all hit me at once, and I just collapsed. I felt horrible from that Thursday through Monday for five or six days. Fever, chills. No taste or smell. I had no appetite.”

In a Twitter update on Sept. 12, Calcavecchia posted: “Update from COVID-19 Ville. This s— is very real! And it sucks. I’ve never had so many symptoms hit me all at the same time. I keep moving around the house trying to escape it. Please be safe and wear ur mask. I thought I was but with this evil s— you never know.”

Because he wasn’t feeling better, Calcavecchia went to the hospital. He had several tests, measuring his blood oxygen level as well as a CT scan on his lungs. His wife posted on Twitter that he had the standard things associated with COVID-19 as well as pneumonia.

Seven hours at the hospital had Calcavecchia fearing the worst.

“I got the chills something fierce,” he said. “Just miserable. I told Brenda, ‘You’ve got to get me out of here; I don’t know if I can put up with this.’ I was panicking. The worst I ever felt. Every bone in my body hurt. I got out of there that night.”

Calcavecchia said he was prescribed a steroid as well as antibiotics and slowly began to feel better.

He remains amazed that his wife, nor any of the other people he was around, contracted the illness. Calcavecchia said he called all three of the courses he visited in Nebraska to alert them. He informed all who had been around him. So far, he said, he has heard of no other outbreaks.

He also wonders whether an illness his wife had before the coronavirus pandemic became well known might have been COVID-19.

“She was really sick when we came home from [a tournament in] Morocco in February,” he said. “We went there for a week, and several people got sick as soon as we got back home. She thought it was the flu, and maybe she had this back then. Nobody can really explain it. I was around Lee Janzen for five days, and he never go it. Brenda tested again this week, and she came back negative and has been fine the whole time. Who knows?”

One thing he does know: COVID-19 was a serious deal for him.

“I never thought it was a hoax,” he said. “I believed it was very real because one of my friends lost his mom about three weeks ago to it right before I got sick. It’s too big of a coincidence for it to be a hoax. I think it is a really evil, vicious virus. Some people get severely sick, others are mildly sick and some don’t have any symptoms at all.”

“We both hit it about the same, which isn’t very far, believe me,” he said. “I actually hit it OK but he had me by 20 or 30 [yards] quite a few drives. I need to get some more strength. Play more golf. Get stronger. Get my zip back. I’ve described it as being lethargic. I take a nap every single day, so I need to get a little more active and get going again.”

Calcavecchia plans to play the remaining events on the schedule starting in two weeks at the SAS Championship in North Carolina.

Phil nervous about fans at event before Masters
Logano holds off Harvick for spot in Phoenix
Passan: The plays and decisions that got the Dodgers back to the World Series
Haley returns to Kaulig in Xfinity Series in 2021
Freire to head return of Bellator featherweight GP