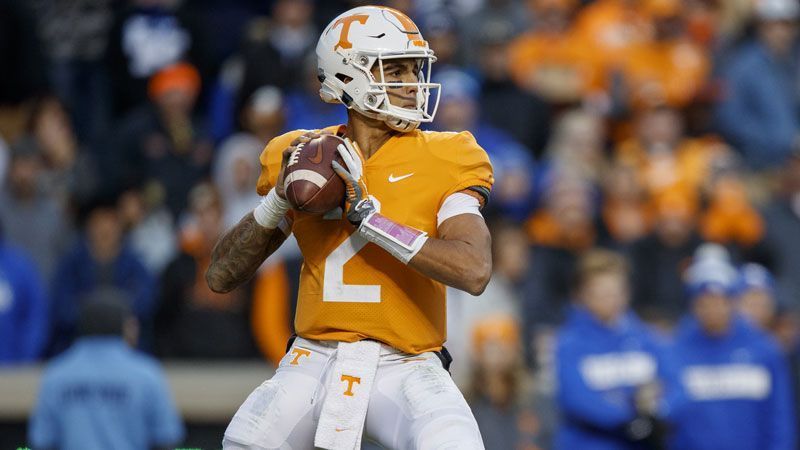 Jarrett Guarantano and the 16th-ranked Tennessee Volunteers are about to find out how much it helps them having the same offensive coordinator for consecutive seasons.

The quarterback who lost his starting job last season and even received death threats has had a full offseason to better learn what Jim Chaney expects on offense.

“When you do the same thing over and over, it creates confidence,” Pruitt said Monday. “So I would suspect that he’s got to have a lot more confidence heading into this season, as opposed to the previous season because the terminology is the same and the people around him are the same. I feel like he’s demonstrated that at practice.”

Guarantano has started 25 of his 34 games played, throwing for 5,062 yards with 32 touchdowns and only 13 interceptions. He’s competed 61% of his passes, and his 2.02 interception rate is the lowest in school history among quarterbacks with a minimum of 400 attempts.

He graduated with a degree in psychology in December and chose to return for his senior season. Deciding to stay wasn’t a tough decision for the quarterback from Lodi, New Jersey.

“There’s no place that I would rather be, honestly,” Guarantano said. “Of course, there’s been ups and downs and in life you experience many ups and downs, so it was nothing for me. There were some things I had to grow and learn from and I wouldn’t undo any of this, honestly.”

Not having to learn new language in yet another playbook allowed Guarantano to work on being better at executing what Chaney and quarterbacks coach Chris Weinke want. He worked during the offseason to gain some weight, and Guarantano also has tried to be more consistent and be a leader.

The 6-foot-4, 230-pound quarterback can tell a significant difference and feels much more comfortable.

“I’m not overthinking many things,” Guarantano said. “I’m able just to read coverages and go through my progressions without having my thought process change throughout the whole thing. It’s definitely more easygoing and it’s way easier on my mind and my body going through some things.”

That will be put to the test Saturday night in the season opener at South Carolina.

The Vols have won six straight. Four players started at quarterback during that streak, and Guarantano started the wins against Missouri and Vanderbilt. He became only the third quarterback in Tennessee history to throw for more than 400 yards when he had 415 yards passing in the win over Missouri.

Now the decision is who backs up Guarantano. Both freshman Harrison Bailey and sophomore Brian Maurer have missed practices, giving J.T. Shrout more work. But Pruitt said they want to give both of the other quarterbacks a chance.

COVID-19 test results and contact tracing has hit the Vols over the past month hard. Pruitt said he had 50 more players available for the opener than he had two weeks ago when a planned scrimmage was turned into a practice. The pandemic makes picking Guarantano’s backup crucial.

“Being able to have a No. 2 and No. 3 is absolutely, always important,” Pruitt said. “I don’t think this season would be any different. We’ve got to continue to grow and develop those guys behind Jarrett.”

The Vols also are waiting to hear from the SEC whether or not offensive lineman Cade Mays can play this season after the NCAA approved Mays’ appeal for a transfer waiver after leaving Georgia. Pruitt sounded optimistic the SEC will allow Mays to play.

“It just makes too much sense not to,” Pruitt said. “We’ve planned all along for Cade to be able to play. If you look at what went in to the waiver process it is pretty evident that the young man deserves an opportunity to play.”

Pruitt also said running back Carlin Fils-Aime, who redshirted as a senior last season, graduated and is sitting out this season. Pruitt said the running back might come back in January.