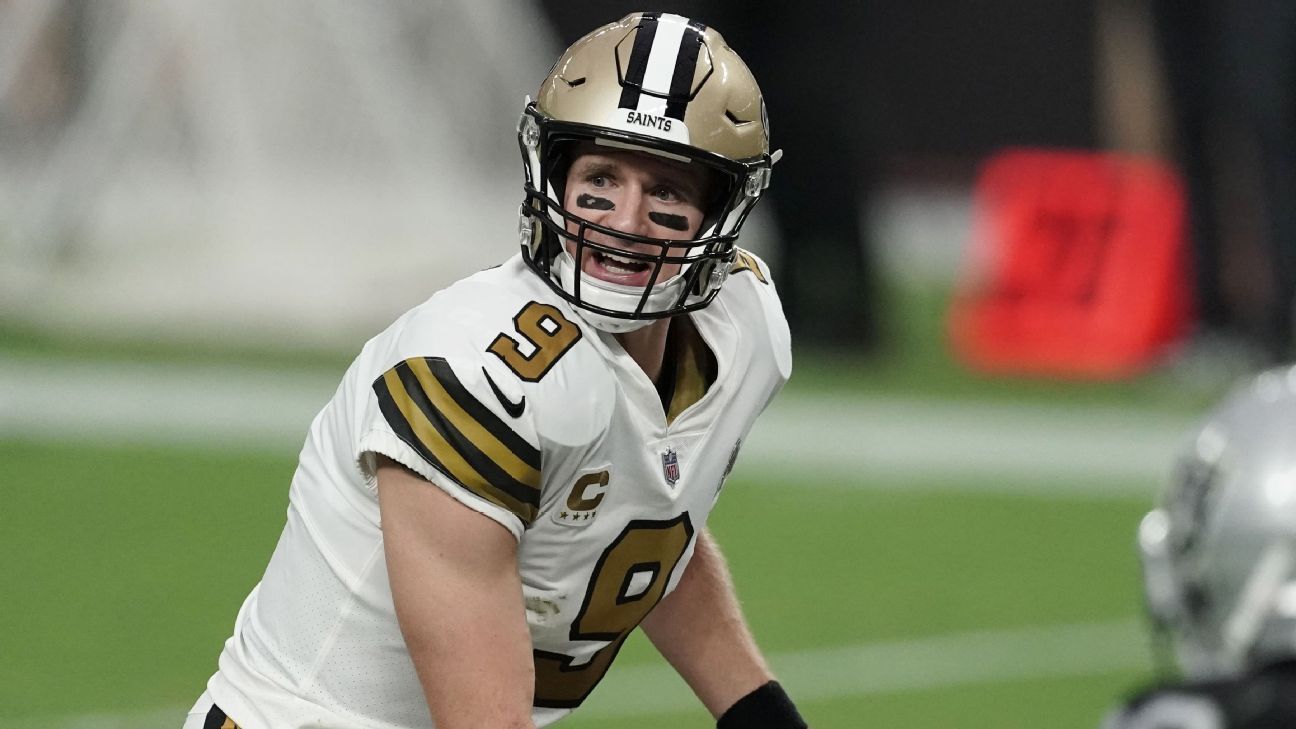 Drew Brees looked his age, and the rest of the team followed suit as the New Orleans Saints went bust in Las Vegas on Monday night.

Brees, 41, had his second straight lackluster performance in the Saints’ 34-24 loss to the Las Vegas Raiders, completing 26 of 38 passes for 312 yards, one touchdown pass and his first interception of the season.

Brees has averaged 4.82 air yards on his passes so far this season, according to ESPN Stats and Information. That’s his lowest through two games as a member of the Saints, and it’s the lowest by any QB through two games since Brett Favre in 2009.

But he was hardly the only culprit in an ugly loss that put a serious damper on the Saints’ role as a top Super Bowl contender. Their offense couldn’t generate much while star receiver Michael Thomas was sidelined with an ankle injury. Their defense couldn’t stop Raiders tight end Darren Waller (12 receptions, 103 yards) all night. And the team had 10 penalties for 129 yards Monday night, including two costly pass interference penalties and three personal fouls by the defense.

“I don’t think it’s gonna be a real pleasant film to watch – for some of our star players as well,” said Saints coach Sean Payton, who pointed to the struggles from the offense, defense and coaches included.

Now the 1-1 Saints will have to try and get their groove back on a short week when they host the sizzling-hot Green Bay Packers (2-0) on Sunday Night Football next week.

QB breakdown: They were whispers last week, but they turned into shouts on social media under the Monday Night spotlight: Are we seeing the begin of a steep decline in Brees’ 20th NFL season, a la Peyton Manning in his final year with the Denver Broncos?

The jury is still out on that after such a small sample size. Remember, Brees wasn’t throwing the ball downfield much the past two years either, and he still found a way to post the two highest passer ratings of his career and the two highest completion percentages in NFL history.

But Brees is barely taking any shots down the field. And what’s more disturbing is that he is showing uncharacteristic inaccuracy on short and intermediate throws, as well.

Brees looked fine throughout training camp after working with longtime throwing coach Tom House on adding zip to his deep throws this summer. But he’ll be the under the microscope — with defenses shrinking the field on him — until he proves otherwise.

Biggest hole in the game plan: Newly signed Saints safety Malcolm Jenkins looked a step behind for most of Monday night. And while we’re picking on the older players, newly signed Saints receiver Emmanuel Sanders hasn’t found his groove yet with his new team, either. He caught just one pass for 18 yards on three targets with a drop and a penalty.

Silver lining: At least Alvin Kamara looked healthy. The Saints’ running back provided the team’s only real spark with 13 runs for 79 yards, nine catches for 95 yards and two TDs. He has already paid big dividends with four TDs in the first two weeks after signing a five-year contract extension the day before the season opener.