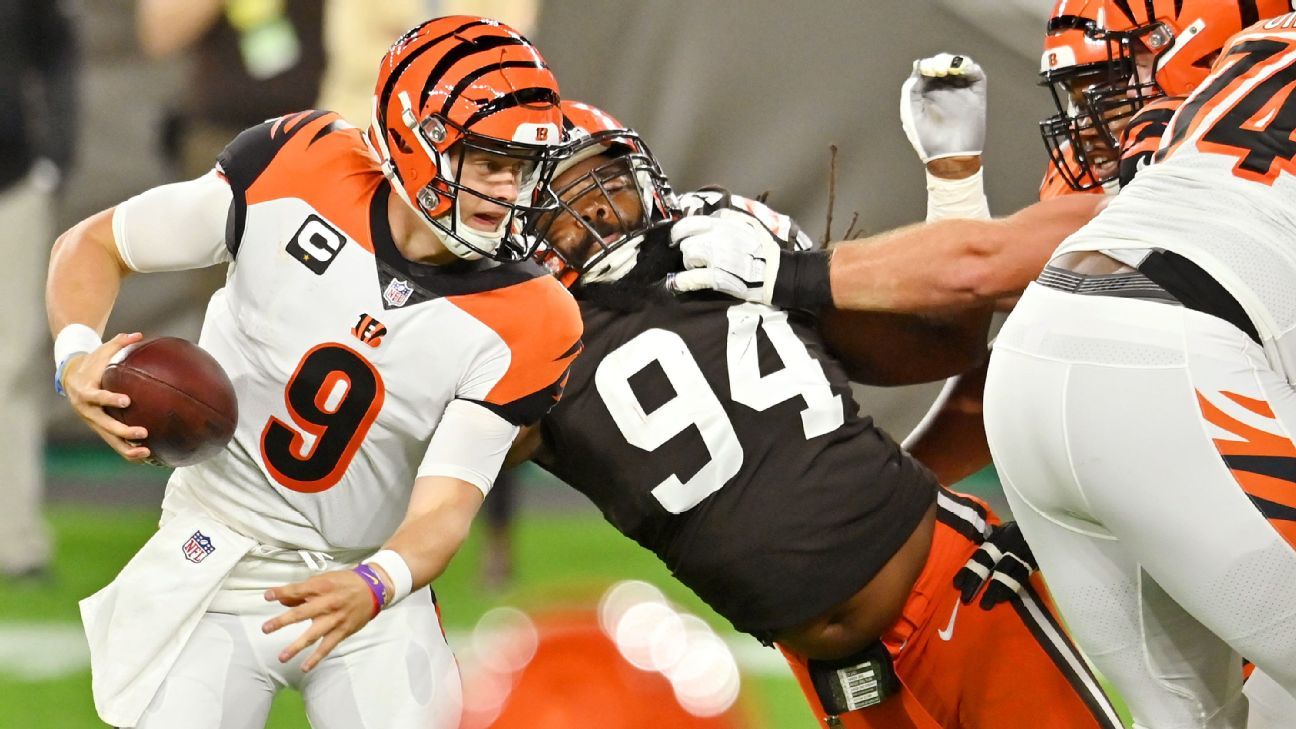 But after Thursday’s 35-30 loss to the Cleveland Browns at FirstEnergy Stadium, it’s clear Burrow needs those around him to play well if he’s going to make the most of his first NFL season.

In his second pro start, Burrow was able to move the offense down the field despite the lack of big plays. However, the rookie was constantly finding himself needing to overcome the play of his teammates.

Once again, the offensive line struggled to protect Burrow. Fred Johnson, who was a tackle last season, started at right guard and had his hands full for most of the night. Burrow saw a potential scoring opportunity squandered when a pass squirted off Tyler Boyd’s hands.

And when it comes to the offense as a whole, the Bengals failed to break through near the goal line. They managed two late touchdowns in four trips inside the Browns’ 20-yard line. When Cincinnati finally found success in that part of the field, it was too late for it to make a substantial difference in the game.

Throughout Burrow’s first two starts, it’s clear the Bengals need their pass protection, receivers and playcalling to put the rookie in a position to succeed early.

QB breakdown: Burrow had a solid performance in his first road game in the NFL. Burrow was 37-of-61 passing for 316 yards and three touchdowns. With Cincinnati trailing for virtually the entire game, the Bengals relied on Burrow’s arm as they tried to erase a deficit they could never close. Just as in his Week 1 performance against the Chargers, Burrow didn’t have any notable big plays through the air. However, he was able to show a strong command of the offense, which is impressive giving Burrow’s inexperience and the pandemic-shortened offseason.

Biggest hole in the game plan: Cincinnati’s defense had no answer for the Browns’ rushing attack. With defensive tackles Geno Atkins and Mike Daniels out with injuries, Cleveland’s tailback tandem of Kareem Hunt and Nick Chubb had prolific performances. Chubb finished with 124 yards and two touchdowns and Hunt had 86 yards and a score. Cincinnati’s poor tackling and inability to stop the run were big problems in 2019. After a good showing in the 2020 opener, it appears Bengals defensive coordinator Lou Anarumo still has several issues that need to be fixed.

Silver lining: Bengals cornerback William Jackson picked up a big interception in the fourth quarter that temporarily gave Cincinnati hope of a comeback. While it ultimately didn’t affect the outcome, it was a good sign for a player looking to close his rookie contract on a strong note. Jackson, a former first-round pick, has tallied only three interceptions in the last three seasons.

Eye-popping Next Gen Stat: The Bengals were unable to get any kind of pressure on Browns quarterback Baker Mayfield. Only four of Mayfield’s 23 pass attempts came with less than 2.5 seconds, according to NFL Next Gen, and was pressured on only three attempts.