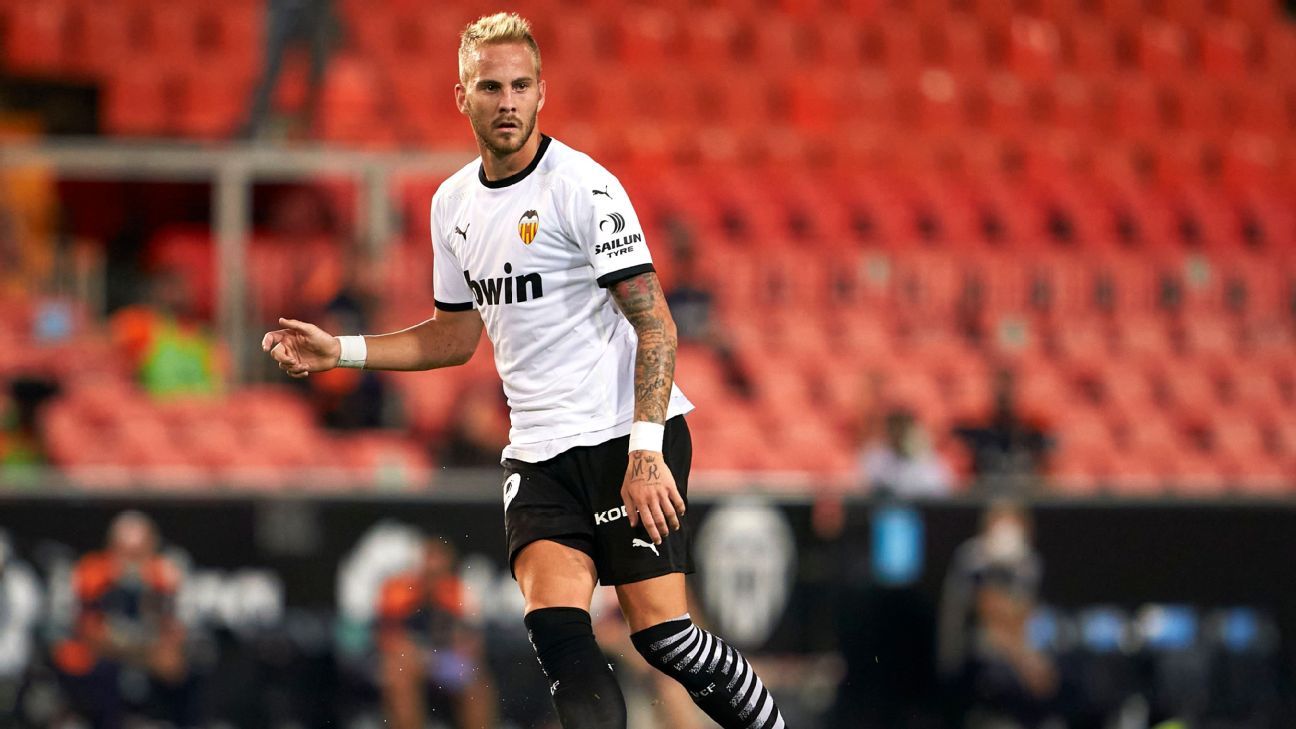 The coronavirus pandemic has made the transfer market uncertain — and you can find out when the windows open and close here — but here are the rumours floating around Europe’s big leagues and beyond. Plus, check out all the latest major completed transfers across Europe.

Manchester United have already spent €45m on one midfielder this summer, Ajax’s Donny van de Beek, but are now weighing up a move for Valencia‘s Uros Racic, according to The Sun.

Racic, 22, arrived from Red Star in 2018 for around €2m but hasn’t settled in Spain and spent time on loan at Famalicao in Portugal and Spanish outfit Tenerife.

The Serbia U21 international has a €100m release clause in his contract but Valencia are struggling financially and reports suggest they could be open to offers around €30m.

Central midfield doesn’t seem an obvious place for United to be adding players right now, as they continue to make Borussia Dortmund winger Jadon Sancho a priority, but Racic would provide competition to compatriot Nemanja Matic as the 32-year-old nears the end of his career.

10.00 BST: Aston Villa have completed the signing of Arsenal goalkeeper Emiliano Martinez for around £20m.

“I always had that feeling that I would have my chance at Arsenal,” Martinez said in an Instagram video yesterday. “Season after season I was always trying to come back to the club I love [from loan] to try and have my chance.

“I waited, I worked past the frustration because football is not always easy, like everyone thinks. I’m proud to overcome my frustration and show the Arsenal fanbase what they missed 10 years ago, because I knew I could do the same thing years before. I truly believe that keepers go at different times and on different paths. For me, it was hard, but I knew there was light at the end of the tunnel.”

09.51 BST: Barcelona will try and sign United States international Sergino Dest on loan from Ajax if they can sell Nelson Semedo this summer, according to Mundo Deportivo.

Dest, 19, was linked with Barca earlier in the summer but his agent, Joes Blakborn, told ESPN at the time that Bayern Munich were the only club to have displayed a serious interest in signing the right-back. However, Mundo claims that the U.S defender is very much on Barca’s radar as they attempt to overhaul their squad following last month’s 8-2 Champions League defeat to Bayern.

Barca need to sell before they can buy and see Portugal international Semedo as one of the few players who could bring in a sizeable fee. If they can move him on, the idea is to bring in a cheaper option to compete with Sergi Roberto for the right-back position.

The offer for Dest would reportedly be on an initial one-year loan with an option to buy next summer, so the incoming president could make the final call on the deal.

09.28 BST: Gareth Bale needs to get out of Real Madrid if he wants to play. Is a return to Tottenham a good idea?

Ale Moreno firmly believes it’s time for Gareth Bale to move on after reports indicate he could return to Spurs.

08.49 BST: Jose Mourinho has sanctioned Tottenham’s attempt to re-sign Gareth Bale, despite being warned by former Real Madrid associates that the 31-year-old will struggle to meet expectations in the Premier League, sources have told ESPN’s Mark Ogden.

As reported by ESPN on Tuesday, Spurs have moved ahead of Manchester United in the race to sign Bale, who has been told he can leave Real, either on loan or for a £18m transfer, after falling out of favour with coach Zinedine Zidane.

United have expressed an interest in the Wales international, but any move for Bale depends on the outcome of their pursuit of Borussia Dortmund winger Jadon Sancho, which remains at an impasse.

With Spurs being able to offer Bale the certainty of a move and the chance to play first-team football, the player now favours a return to the club he left for Real in an £85.3m deal in August 2013 and talks began earlier this week to strike a deal.

08.29 BST: It’s a good time to be an Arsenal fan with the team top of the Premier League (albeit just one game into the season) and star striker Pierre-Emerick Aubameyang now officially on board for the foreseeable future.

After months of wrangling, Aubameyang has agreed a new three-year contract that will reportedly make him the highest paid player at the Emirates and keep him there beyond his 34th birthday.

With 72 goals in 111 games for the club already, Arsenal were obviously more than happy to crow about it.

Real and Spurs have agreed a fee of around €30m and the defender will sign a five-year contract, although the final details of the move are now being worked out.

How VAR decisions affected every Premier League club in 2020-21 Real Madrid — who were impressed with Reguilon’s progress on loan at Sevilla FC last season — have insisted on the inclusion of a buy-back option.

The 23-year-old would prefer a move to Old Trafford but United have yet to agree to Real’s demands for the buy-back clause, something Spurs have accepted as part of negotiations with the Spanish giants.

Callum Hudson-Odoi insists he’s unfazed by the competition at Chelsea despite their newest signings.

Bayern Munich nearly recruited Chelsea academy prodigy Callum Hudson-Odoi in January 2019, with the England youngster going so far as reportedly putting in a transfer request before ultimately penning a new five-year contract at Stamford Bridge nine months later. Nearly two years on, the eight-time defending German champions are preparing to take another run for the 19-year-old.

The Mail reports that after a summer spending spree that’s seen Timo Werner, Kai Havertz and Hakim Ziyech join an attacking corps that already included Christian Pulisic and Mason Mount, Hudson-Odoi might feel opportunities are too limited in west London as he prioritises playing time ahead of next summer’s European Championship. And Bayern are growing increasingly hopeful that Chelsea could entertain offers for the winger with their newfound depth in attack.

The report suggests that there is hope that a deal could be concluded before the transfer window closes on Oct. 5, with Juventus also said to be monitoring the situation.

Chelsea fought tooth and nail to keep the prized academy product two years ago. Will they be as committed to keeping one of their own with such a glut of coveted young attackers in their ranks? Bayern will be hopeful those in the Blues’ boardroom are asking themselves the same question.

The shock transfer news of Tuesday was that of Tottenham Hotspur’s move to bring Gareth Bale back to the Premier League, as reported by ESPN’s Mark Ogden and Alex Kirkland. But it gets better.

According to the Daily Telegraph, so desperate are Spurs to bring their former talisman back to north London that they’re willing to offer Real Madrid Dele Alli to get the deal done. As anyone who’s already watched “All or Nothing: Tottenham Hotspur” will know, manager Jose Mourinho is a great admirer of Dele, so to be willing to part with the 24-year-old to secure Bale’s signature is an enormous statement.

It emerged Tuesday that any such deal for Bale would see Los Blancos pay a portion of Bale’s wages, and the Telegraph writes that the figure is 50% of the 31-year-old’s £600,000-a-week pay packet.

Manchester United are also in frame to make a move for Wales international Bale, but as of now a return to Spurs is the more likely option.

While Juventus reportedly have already agreed personal terms with Barcelona striker Luis Suarez on a three-year contract, Goal reports that the Bianconeri are becoming pessimistic that they’ll be able to seal the deal for the Uruguay international.

The roadblock here is that Juve already have a full allotment of foreign players, and the club were hopeful that Suarez, whose wife is from Italy, would be able to secure an Italian passport to comply with Serie A regulations. However, those hopes are now fading as the 2020-21 season kicks off this weekend.

As such, the Old Lady is now looking for alternative options, with AS Roma captain Edin Dzeko being chief among them, with the capital club closing in on a move for Napoli front man Arkadiusz Milik.

– Leeds United haven’t given up hope on signing Udinese playmaker Rodrigo De Paul, according to Football Insider. The website reports that Leeds are ready to table a loan-to-buy offer for the 26-year-old, who could join them permanently should Marcelo Bielsa meet Udinese’s £37m price tag.

– The Mirror writes that Everton are preparing to offload a glut of players to help balance their books following another summer of investment, with Theo Walcott, Gylfi Sigurdsson, Bernard, Moise Kean and Alex Iwobi among 10 players the Merseyside club will look to shift permanently.

– Sheffield United‘s initial £3m plus add-ons bid for Arsenal striker Folarin Balogun has been laughed off, with the Gunners demanding at least five times the sum of Blades’ offer, according to the Daily Mail.