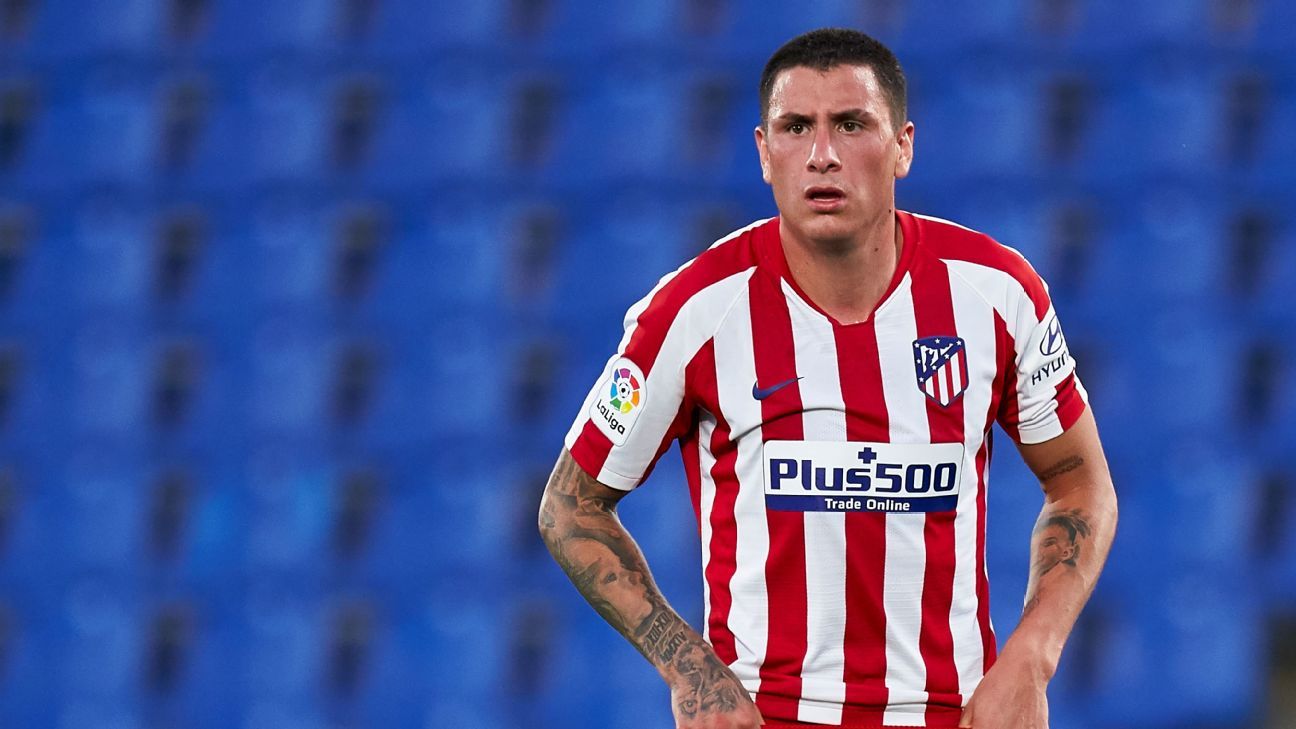 The coronavirus pandemic has made the transfer market uncertain — and you can find out when the windows open here — but here are the rumours floating around Europe’s big leagues and beyond.

The Blues have already signed striker Timo Werner and winger Hakim Ziyech and are expected to add Bayer Leverkusen‘s Kai Havertz to a new-look squad, but Lampard knows he needs defensive reinforcements.

Real Madrid left-back Sergio Reguilon is in talks to join, with discussions already at an advanced stage, sources have told ESPN’s Rodrigo Faez and Alex Kirkland. But Gimenez would add some much-needed quality to the Blues’ central defence, and though he has a release clause of £110 million, Lampard is hoping to get him for significantly less.

The Uruguayan is highly rated, though he has struggled with injury this season. And while Chelsea have rotated Antonio Rudiger, Andreas Christensen, Kurt Zouma and Fikayo Tomori, Gimenez would slot seamlessly into centre-back.

Gab Marcotti sees only one reason why Arsenal would want to add Chelsea’s Willian on a three-year deal.

10.25 BST: Willian has agreed a three-year contract at Arsenal worth around £100,000-a-week, sources have told ESPN’s Tom Hamilton, with the move expected to be announced later this month.

The 31-year-old had been in talks over a new contract at Chelsea but will end his seven-year association with the club after they were not prepared to offer him the terms he wanted. Blues head coach Frank Lampard wanted Willian to stay and has been pushing the club to find a breakthrough in negotiations, which have been deadlocked for months.

However, sources said that Lampard has failed to persuade the Chelsea hierarchy to sort a new contract for Willian and Mikel Arteta has stepped in to secure the midfielder, who won two league titles and the Europa League at Chelsea.

10.06 BST: Alexis Sanchez‘s nightmare at Manchester United is over after signing for Inter Milan on a permanent deal.

United have agreed to cancel the remaining two years of Sanchez’s contract and the Chile international has joined Inter on a free transfer and signed a three-year contract.

Sources have told ESPN’s Rob Dawson that United have handed Sanchez a “small” pay-off and club chiefs are satisfied with the conclusion of the 31-year-old’s disastrous spell at Old Trafford. Sanchez, according to sources, has taken a pay cut to facilitate the move.

Alaba, 28, has a contract which expires in 2021 and both sides have yet to reach an agreement over a new deal. The Austria international has been linked with Manchester City, but has dreamed of playing in Spain and was eyeing a move to Barcelona or Real Madrid.

However, the economic crisis in football caused by the coronavirus pandemic has not worked in his favour and after initial talks between Alaba and Bayern collapsed in June, they have now restarted.

Gab Marcotti explains why a new deal at Bayern Munich is beneficial for David Alaba and the club.

Elsewhere at Bayern, kicker says that midfielder Javi Martinez has been linked with a move to Rennes.

The 31-year-old was one of the cornerstones of Bayern’s 2013 Treble winning season but has seen less playing time in recent years. Under contract until 2021, he has no long-term future at the Allianz Arena and this summer will be the last chance for the German champions to cash in on him.

Kicker also reports that Lucas Hernandez could leave the Allianz just one year after arriving as the league’s record signing following his €80m transfer from Atletico Madrid.

Injuries have not helped the 24-year-old’s development and the defender has Jerome Boateng, Niklas Sule and David Alaba ahead of him in the pecking order at centre-back.

United are keen to sign Sancho but have so far refused to match Dortmund’s €120m asking price. The Bundesliga side have set a deadline of Aug. 10 for the two clubs to reach an agreement but Zorc believes the England winger will stay.

“I assume that Jadon will go to training camp on Monday and play with us for the coming season,” he said on Wednesday.

Dortmund CEO Hans-Joachim Watzke added there has been no contact with United, but sources have told ESPN’s Rob Dawson that early negotiations have taken place. No bid has yet been tabled but there remains hope at Old Trafford that a deal can be reached.

09.22 BST: Manchester United youngster Tahith Chong, 20, is pushing for a move to the Bundesliga, his agent has confirmed.

“He would like to play in the Bundesliga,” Erkan Alkan told Bild. “We’ll discuss this with Manchester United on Thursday.”

Chong, a regular for the United’s reserves, has been identified by Werder Bremen as a player to help the Bundesliga side avoid another season stuck in a relegation battle. The German side’s chiefs Frank Baumann and Clemens Fritz have already met with Alkan earlier this week and they later called Chong a potentially interesting player.

Chong is under contract at Old Trafford until 2022 but was limited to just three brief Premier League appearances last term. Should he move to Germany, it is expected that he will join Bremen on an initial loan deal.

08.59 BST: Manchester City announced the signing of Nathan Ake from relegated Bournemouth to a five-year deal on Thursday evening.

Ake becomes City’s second signing of the summer after they announced the arrival of Ferran Torres from Valencia.

Bournemouth needed to cash in on Ake following their relegation from the Premier League and City have agreed a £40m deal with a further £1m in bonuses, sources told ESPN.

Chelsea had a buy-back clause in the deal that sold Ake to Bournemouth in 2017 but sources told ESPN they were not interested in a deal to re-sign their former player.

The 25-year-old made 121 appearances for Bournemouth after moving from Chelsea, initially on loan, in 2016. He has won 13 caps for the Netherlands.

– Transfer grades: City get A for Torres and B+ for Ake

Gab Marcotti explains why Nathan Ake is a “Pep player” and believes Man City will sign another defender.

08.28 BST: Villarreal have secured a loan deal of Real Madrid’s Take Kubo for the 2020-21 season, sources have told ESPN’s Alex Kirkland. The midfielder will arrive to Villarreal on a season-long loan with no purchase option included in the deal.

Kubo spent the 2019-20 campaign on loan at Mallorca, where he scored four goals and set up five more in 35 league appearances. With Eder Militao, Rodrygo and Vinicius Jr. occupying the three-non European spots at Madrid next season, Kubo, 19, could not remain at the club.

As many as 30 clubs had reportedly shown an interest in acquiring the Japan international but Villarreal proved to be the right fit. PSG had reportedly wanted to sign Kubo on a permanent transfer but Real Madrid have no intention of selling the player. Bayern Munich and Ajax were also keen to sign Kubo on loan but the player prefers to remain in La Liga.

Madrid wanted a club that pays Kubo’s €2m wages and that gives the player the chance to play European competition next season.

Sanchez signed with Inter on loan at the start of the 2019-20 season following a disappointing spell at United where he scored only five goals in 45 matches.

Although the Chilean scored only four league goals this season, he seemed to have rediscovered his touch in Italy where he topped the club’s charts with eight assists as Antonio Conte’s Inter finished runners-up behind Juventus.

“It will be official tomorrow [Thursday] in the morning,” Marotta told Sky Sports. “The player is completely ours and we have a three-year contract with him. We think he can be a full member of our squad.”

The transfer will also allow Sanchez to play in the rest of Inter’s Europa League campaign after they advanced to the quarterfinals on Wednesday with a 2-0 win over Spanish side Getafe in Gelsenkirchen, Germany.

Inter Milan coach Antonio Conte has applauded his club for completing the deal. Speaking after Inter’s win over Getafe in the Europa League on Wednesday night, Conte told Sky Italia: “Sanchez’s operation has been a excellent move by the club. I applaud the club for closing an excellent operation, very convenient. We deserve it,

“He came at a bad moment in his career and with us he immediately got hurt. We waited for him and he is now doing well. It is fair that we are the ones that can now enjoy him.”

PSG and AC Milan in chase to sign Barca’s Emerson

Barcelona full-back Emerson Royal hasn’t played for the club this season, but his form for loan side Real Betis could help his employers raise some much-needed income, reports Sport.

AC Milan have already seen a €20m bid rejected for the Brazilian, and now they could be blown out of the water by the French champions.

Barcelona and Betis share the rights to the player, and the latter will be in line for compensation should the 21-year-old be sold this summer thanks to the player having a two-year loan agreement.

Now, as well as Milan, Paris Saint-Germain are stepping up their interest, though no official bid has been forthcoming.

PSG and Barcelona don’t have the best relationship, but Emerson could still be used as a makeweight for the transfer of Neymar, rumours of which continue despite the Brazilian stating he’s happy in the French capital.

In-demand defender Gabriel Magalhaes appears to be closing in on a move to Arsenal, according to French outlet La Voix Du Nord.

Gunners chiefs have been talking to the player’s representatives and it now appears as though the Londoners have edged ahead of rivals Manchester United and Chelsea in an effort to land the Lille 22-year-old.

Lille want €30m for a player they purchased for €3m in 2017, while Napoli have also been monitoring him.

– PSG boss Thomas Tuchel is demanding his side sign David Alaba to reinforce his defence, according to Le10 Sport. Alaba has been a long-term target for the French champions but the interest has intensified, with Tuchel keen to replace the outgoing Thiago Silva with the Austrian’s experience. Alaba has one year remaining on his contract, and though PSG appear to be the front-runners, Le10 Sport believes Bayern would rather sell to Barcelona or Real Madrid.