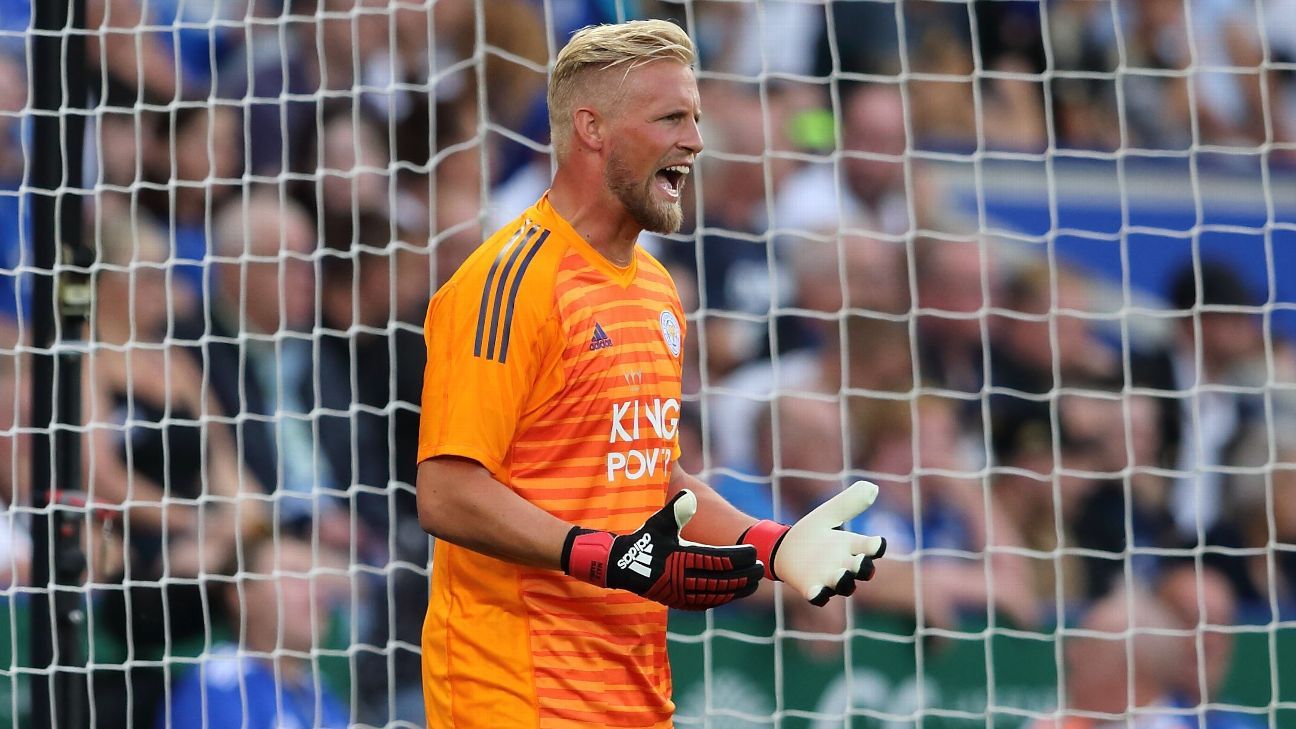 The coronavirus pandemic has made the transfer market uncertain — and you can find out when the windows open here — but here are the rumours floating around Europe’s big leagues and beyond.

Manchester United are used to having a top class goalkeeper called ‘Schmeichel’ as their No. 1, but instead of Peter, it’s his son Kasper who is now attracting attention.

Peter Schmeichel was a legend at the club in the ’90s, but Kasper Schmeichel is a quality player in his own right and helped Leicester to an incredible Premier League title in 2015-16.

The Sun claims that United have grown tired of David De Gea‘s poor form and are looking to bridge the gap until Dean Henderson is experienced enough to take over in a few years by signing the 33-year-old Schmeichel.

United have watched Atletico Madrid‘s highly-rated Jan Oblak, but the 27-year-old has a release clause of €120 million. Schmeichel would be considerably cheaper AND the prospect of a United goalkeeping shirt with the name ‘Schmeichel’ on the back again is tantalising.

10.07 BST: Barcelona are open to selling Ivan Rakitic to his former club Sevilla, according to Mundo Deportivo.

The Croatian midfielder joined Barca from Sevilla in the summer of 2014 and is tied to the Catalan outfit until June 2021. A reported target of PSG, Rakitic has been placed on the transfer list in the past two windows.

The 32-year-old was reluctant to leave Barca in January, but now he wants to end his professional career at Sevilla and Barca are willing to grant him that wish at a price. Barca have no intention to allow the player to leave for free and are willing to accept a fee in the region of €10m.

09.55 BST: Watford striker Troy Deeney is on the radar of Tottenham, according to the Daily Mail.

Deeney, 32, was relegated with the club this season but has shown he can play at the highest level and Spurs are looking for a reliable backup to Harry Kane.

Tottenham will also have been impressed at how much Deeney hates rivals Arsenal.

09.24 BST: AC Milan sporting director Paolo Maldini said that he sees Zlatan Ibrahimovic as a part of the club for next season.

After struggling in the first half of the season, Milan have lost only twice since Ibrahimovic’s arrival in January from MLS side LA Galaxy. However, the 38-year-old’s contract expires at the end of the season and it will be up to the club directors to negotiate an extension.

“We have created something this season which needs continuity. Zlatan is part of this project,” club legend Maldini said. “It won’t be any easy negotiation but we want to move forward with him. In attack with him we feel content, then there are Ante Rebic and Rafael Leao as well as other young players who can grow exponentially with him. That is our line.”

09.00 BST: Chelsea winger Callum Hudson-Odoi only signed a new contract earlier this year, having been repeatedly linked with a move to Bayern Munich. But now Manchester United are reportedly interested.

Hudson-Odoi, 19, has slipped down the pecking order at Chelsea and the Manchester Evening News reports that United are keen.

However, with Willian and Pedro departing Stamford Bridge for free this summer, the Blues won’t let another winger go cheaply.

– Don’t have ESPN? Get instant access
– What did you miss? The latest from Europe’s top leagues

The fee is believed to be Bayern’s asking price for the 29-year-old, while Thiago is keen to try his hand somewhere new after seven successful years in the Bavarian metropolis.

Thiago has been heavily linked with Jurgen Klopp’s side for some time as the Reds look to strengthen their midfield, but PSG’s offer could see Les Parisiens get the upper hand in the chase for the seven-time Bundesliga champion.

Liverpool may have cooled their interest due to the emergence of Curtis Jones and the improvement of Naby Keita. Thiago has one year left on his contract, and PSG appear happier to pay a premium in an effort to rebuild their side.

Barca and Juve return for another swap deal

The coronavirus pandemic has forced many clubs to think outside of the box in an effort to refresh their playing squads without parting with hefty fees, and Barcelona and Juventus could be about to embark on their third swap deal of the year, according to Calciomercato.

The Italian title is suggesting that Barca and Juve are in discussions about a deal that would see Ivan Rakitic head to Italy and Rodrigo Bentancur in the other direction.

Rakitic has one year left on his contract at Barcelona and the Catalan club are keen to sell him this year, while they see Uruguayan Bentancur as a potential replacement for Sergio Busquets.

Barca would have to pay €30m to make the deal happen.

Mayoral could be first Madrid player to leave

Real Madrid are planning a busy summer and the first player to move through the revolving door could be Borja Mayoral who is set to join Lazio, according to Marca.

Mayoral has been on loan at Levante this season but Madrid are hoping to recoup around €20m for the striker as he heads to Italy.

Madrid are planning their own spending spree and so any money in the bank will be helpful, while Lazio are hoping Mayoral can challenge Ciro Immobile in attack and offer greater strength in depth.

Madrid will have first refusal and so will be able to re-sign the forward if they want to, but more important for them right now is getting money in to help them strengthen. As well as Mayoral, they’re also looking to bring in another €20m for left-back Sergio Reguilon as well.

– AC Milan are in the market for a new right-back and Sky Sport Italy is reporting that they’re targeting Tottenham Hotspur‘s Serge Aurier. Discussions are believed to have started between the two clubs but the Rossoneri will have to part with between €12m and €15m to secure the Frenchman. Milan are also keeping tabs on Barcelona’s Emerson Royal and PSV Eindhoven‘s Denzel Dumfries.

– Manchester City defender Eric Garcia has reportedly made it clear that he wants to return to his former club Barcelona, according to Sport. The Spanish title is suggesting that the move is only “a matter of time,” and that an agreement could be reached at the end of this year’s Champions League campaign. Garcia is integral to Pep Guardiola’s defence but the young Spaniard seems intent on battling for a place at Camp Nou.