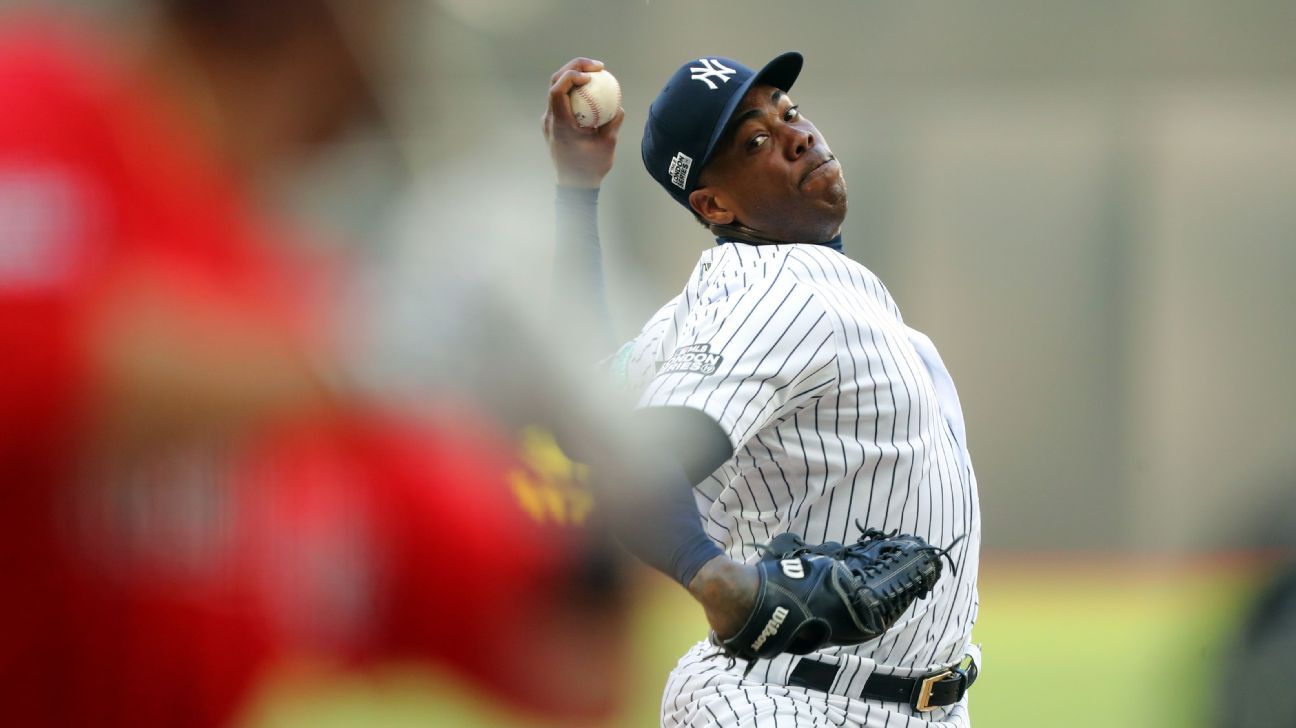 “We did have a player test positive, it was Aroldis Chapman, so he is not at camp. He’s got mild symptoms but overall is doing well,” Boone said. “He will not be here for the foreseeable future. Beyond that, I’m not going to get into commenting much on him.”

Chapman told ESPN on Saturday that he was feeling well and had “very little symptoms.” MLB is also providing players’ households access to regular COVID-19 testing, so Chapman’s right-hand man and personal trainer was also tested with negative results.

With a positive test, Chapman joined fellow Yankees pitcher Luis Cessa and infielder DJ LeMahieu, both of whom were tested before heading to New York in order to complete the intake testing protocols. Chapman passed all intake testing and was allowed to report to workouts at Yankee Stadium, where he had been since last Sunday. Chapman even addressed the media Tuesday and talked about “feeling game-ready” after throwing two bullpen sessions.

“At this point, I feel like we’re following all protocols. We have not had any other positive tests. We’ve adhered to all the contact-tracing things. So we feel like we’ve handled it and are handling it,” Boone said. “And again, this is something that, even moving forward, a positive test is probably going to come our way, and it’s about doing all the things that hopefully as a whole, keep us safe and healthy. But right now we feel like we’re doing a good job in here of managing.”

There is no set of protocols that can completely eliminate the risk of contracting COVID-19, but to avoid having to halt play this season, MLB and the MLBPA agreed upon an extensive set of rules and regulations contained in the extensive “2020 Operations Manual.” After a positive test, indicating that an individual has contracted COVID-19, the subject is instructed to immediately self-isolate and be treated consistently with all protocols for positive test results, as detailed in the manual.

All three players that have tested positive authorized the Yankees to divulge their names. Teams are not allowed to divulge the names of any player who tests positive for COVID-19 without him agreeing to reveal his status.

“I believe everybody [else] came back negative besides Chappie, so that’s good,” said outfielder Aaron Hicks, who explained players were scheduled for another round of testing Saturday. “Expecting you to go throughout the whole season without anybody even testing positive, I think that would be remarkable. It’s part of what’s going on right now; you can get the COVID at any time.

“Everybody was pretty understanding that it’s not anybody’s fault, it just kind of happened. Of course, you’re going to automatically go and go running back through your head was I ever near this guy, or this and that … but we’re doing everything we can to stay safe.”

The Yankees still have one of the deepest relief corps in the majors and should have little trouble replacing Chapman, should it be necessary, with Zack Britton being favored to fill in the closer role.

“Obviously, Britton has been an elite closer in this game for a long time, and is still a great pitcher, so he naturally could fill that role. It’s easy to put him in that [role],” Boone said. “But again, with our team, and with our bullpen and our pitchers, we feel confident in a lot of guys, but Britt would be a natural guy if Chappy wasn’t back at that point.”

On Friday, MLB announced that during the two phases of testing performed so far, known as “intake” and “monitoring” phases, the league had a yield of 83 positive tests out of 11,149 samples, or 0.7%. Among the 83 positives, 71 were players and 12 staff members. Out of the 30 clubs, 28 have had at least one player or staff member test positive over the two phases.